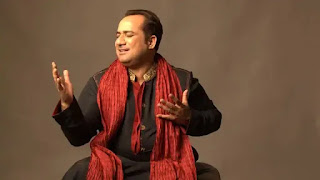 Rahet Fateh Ali Khan is a Pakistani born musician. He is the nephew of the late Nusrat Fateh Ali Khan. Rahet Fateh Ali Khan is primarily the singer of the qawwali music type, which is a form of Sufi Islamic devotional music originating from South Asia, and notably popular in the Punjab and Sindh regions of Pakistan; in Hyderabad, Delhi and other parts of India. I find Qawwali music particularly appealing as it relates to my cultural music choice as well. As a Sikh, I find the idea of singing in a group setting very comforting and always participate when I have the chance. The idea of singing religious poetry in togetherness resonates in both Sufi culture as well as Sikh culture. I have a very high amount of respect for individuals that have devoted their lives to singing and bringing audiences together through their voice. I particularly chose this artist because Rahet is someone who has inspired me throughout life for as long as I can remember. My favorite songs by him is “Nit Khair Mangan”. Below is some more information regarding Rahet through the links provided.

As mentioned before, Rahet’s primary music style is Qawwali. Qawwali is the spiritual music of Indian and Pakistani Sufism, it is rooted in song forms that are over 700 years old. Qawwali songs are worshipful songs that are a tribute to Islamic virtues and shower praise upon Allah (God). Qawwali is envisioned to affect sharply and spirituality through ritualized listening recognized as Sama.

This website starsunfolded.com displays various music and movie stars and talk about their lives. This website gives all the background information about Rahet and his family as well as some accomplishments about his life. One thing I learned from this website is that the majority of Rahet’s family ancestry from before and now were all singers and composers.

The above website displays some of Rahet’s most popular compositions and songs in the current century. Rahet’s is a popular music singer for today’s youth in the music industry. Some of his most popular songs include “Tumhe Dillagi, Teri Meri, Mere Rashke Qamar, and Nit Khair Mangaan”.
Posted by Kiran Sohal at 10:30 PM
Newer Post Older Post Home