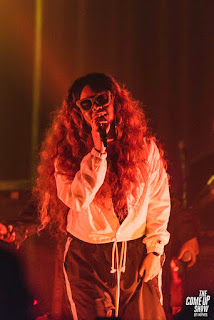 Gabriella Wilson, also formally known as H.E.R. An anagram meaning "Having Everything Revealed" is an American singer and songwriter who has a soulful voice and intricate songwriting style. Her music can be described as both poetic and deeply emotional. Gabriella has gone on to win 2 Grammy's in 2019, one for best R&B performance and one for best R&B album. In 2020 she was nominated for 5 nominations including best album of the year for her most popular album, "I Used To Know H.E.R," and song of the year, "Hard Place." Gabriella was born in the San Francisco bay area and has deep California roots. She has gained support in upcoming years from many famous artists including; Rihanna, Usher, Tyrese, Alicia Keys, and Bryson Tiller, all popular names in the POP/R&B genre. Her music differs from other styles of R&B due to it's emotional highs and lows and precise lyrical flow. She is able to translate her emotions onto paper and use her expressive and creative talent seamlessly. She carries an element of mystery about her and chooses to cover her eyes with sunglasses. This is a way to protect herself from herself. The eyes are seen as windows to the soul, and she describes this need to wear shades as reflecting and seeing one's "self" in her eyes. This mirroring is deeply personal. 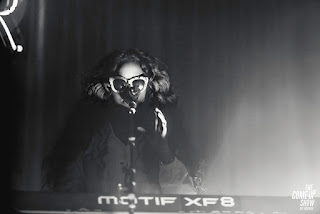 This website highlights an interview with Gabriella and talks about her rise to fame being somewhat anonymous with minimal promotion and how she got her start in 2016 releasing her Vol. 1 and Vol. 2 EP covers with just a silhouette. Gabby talks about why she created this persona and says that, "I think it has allowed me to make the music the focus, and for people not to care about the superficial things, or who I am associated with, what clique I belong too, all those things that don't matter... it's really made people focus on the music, and that's what's special about it." She explains what her inspiration behind her album was, how she channels Lauren Hill in her song, "Lost One's," and her songwriting process. 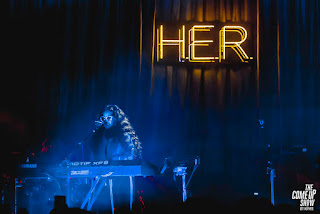 This interview talks about Gabby's roots, how she grew up and more of her musical inspirations. She is a mixture of Filipino and African American, she grew up in a mainly Filipino home with traditional customs. She also talks about her father's side of the family and their customs eating soul food on the weekends in good company. She says that, "black culture, to me, is so important and I identify with young black women. I represent young black women, and I am proud of that." She talks about her musical influences, songwriting, and collaborations. 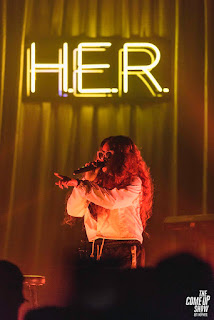 This article talks about H.E.R. and how she prefers to keep a low profile. She likes to remain anonymous instead of worshipped like a celebrity. She wants her music to speak for itself and it does. Gabby gets more in-depth about why she chooses to remain anonymous... "I reveal who I am and my stories and my emotions, and music is an outlet for me. But it's all revealed through my music and my message. Even though I don't show my face, and I don't show people who I am and more about me, you get to know who I am in my music." Her upcoming album is set to drop early this upcoming year, which is exciting news for her fans. She also talks about how Prince and B.B. King are some of her inspirations.