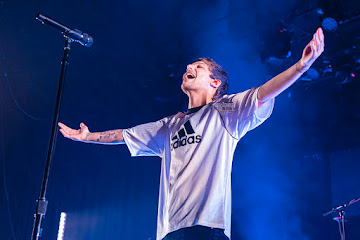 Louis Willam Tomlinson was born on December 24th, 1991. Louis is known as a singer, songwriter, actor, and soccer player. While in high school he was always the lead in the school play and he has started as a side character in two movies. His success in the musicals at school influenced him to audition for the X-factor.  In 2010 he auditioned for the X-factor as a solo artist. While he was successful for the first round he did not make it to the judge's houses round. Simon Cowell chose four of the boys that were sent home to make a boyband; Louis Tomlinson, Harry Styles, Niall Horan, Liam Payne, and Zayn Malik, and thus One direction was formed. The X-factor Journey for the band was successful; they kept advancing into the next round until the finale where they got third. They got third place but the success didn’t stop. Within the next year, they released their first album and tour. Five years, five albums, and six world tours later they decided to take a hiatus. While in his boyband One Direction he co-wrote hit songs like, Steal My Girl, Midnight Memories and Story Of My Life. He also wrote songs while in the band like No Control and Home.

In 2015 when the band went on hiatus they decided to start their solo careers but Louis’ was delayed a little bit due to the passing of this mother in 2016.  Later in 2016, he released his first solo song titled Just Hold On that he collaborated with Steve Aoki. This song is about him dealing with the emotions that come with losing a close family relative. In 2019 another family tragedy happened and he lost his sister to an unknown heart condition. As a result of his sister’s and mother’s death, he wrote the song titled Two of us. While dealing with the losses of his family members he still had been writing for his debut album this also put a slight delay on the album. Louis’ album came out in January 2020 titled Walls. In interviews, he talks about the meanings of the songs. He says this album is very honest and open while he has never said what songs are about what he says some songs are about love than some are about family. The songs on the album consist of some love ballads and some songs for his fans. This album was solely written by him except for Only The Brave.

I resonate the most with is; Two of Us. The first verse is very emotional as it says; “It's been a minute since I called you, Just to hear the answerphone, Yeah, I know that you won't get this, But I'll leave a message so I'm not alone, This morning I woke up still dreaming, With memories playing through my head, You'll never know how much I miss you, The day that they took you, I wish it was me instead” Over the past year I have had a recent family death and I took it really hard. I understand a lot of the lyrics in the song like when he says “Just to hear the answerphone” For the longest time after when I was upset and I missed their voice I would call her phone just to hear her voice again and I would and still do play old voicemails to hear her voice again. Losing a close family member can be really rough at all times of the day so when I listen to this song I know that I'm not alone in how I feel and my feelings of being resentful, upset, and mad at them for leaving. Another lyric that stands out to me is in the second verse as it says “I know you'll be looking down, swear I'm gonna make you proud” I like to think of this as the loved ones that are no longer here with us are still looking down on us and they should be proud of how far we have come since facing the hardship of losing them.

MTV interviewed Louis and they talked about his single We Made It. In this interview, they talked about the personal tragedies that he has been through like losing his sister and mom within a year. He talks about how he wanted this song to mean something and how he stopped writing songs for other people but started writing for him that's why this song is more personal than the other ones.

Rollingstone interviewed Louis and he talked about how the 10’s decade was for him from auditioning for the X-factor in 2010 to becoming a solo artist in 2017. Also becoming a Father in 2016 to working with well-known artists like Steve Aoki.

Rollingstone interviewed Louis and he talked about how different it was writing as a solo artist. They also talk about how writing as a solo artist is more like swimming against the tide because you can bounce ideas off each other in a band and when you are solo you don’t have the option to do that as much.  He also said that he took a lot of time on writing the songs because the lyrics are important and meaningful. He also said that the song two of us is one of his proudest moments because of how important the message is.