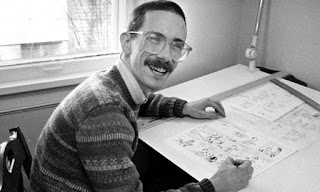 Bill Watterson is the author and artist behind one of the world's most famous comic strips: Calvin and Hobbes. He is an intriguing man and artist. His dedication to privacy despite his fame is very admirable, as is his ability to critique the world in such an accessible format. I find Bill Watterson to be especially worth sharing because of the beloved nature of his comics, and his ability to create truly strong characters and capture the essence of boyhood while humorously critiquing the world through such lovable characters.

http://www.biography.com/people/bill-watterson-9525322#calvin-and-hobbes
This brief biography about Bill Waterson reveals that Watterson had a very rough start at being a comic artist. While he did receive a job straight out of college as an editorial cartoonist, he lost the job within a year and spent the next several years living at is parents sending comics off to be rejected. Watterson's success came with the creation of Calvin and Hobbes, the well known and loved comic strip that led Watterson to be the youngest ever recipient of the National Cartoonist Society's Reuben Award. Watterson ended the comic strip in after ten years in 1995 to ensure the integrity of his creation was not compromised with time. It is for the same reason that he has always adamantly refused to allow merchandising of his characters. 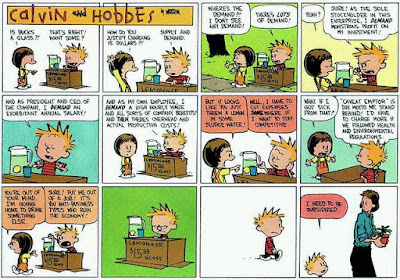 https://www.washingtonpost.com/news/comic-riffs/wp/2015/03/10/read-heres-an-excerpt-from-bill-wattersons-rare-new-calvin-and-hobbes-interview/
In this interview with Bill Watterson, Watterson talks about his growth as an artist, is inspiration, and the decision to make Hobbes a tiger. He talks about how as a kid, he was a huge fan of the Peanuts comics by Charles Schultz. As for the art style used in the Calvin and Hobbes comics, Watterson said that he didn't think much of it at first, as he figured it would just get thrown out and rejected like his other works, but as time progressed he began to think more about what angles he was drawing Calvin from and making small changes to make it easier to do things like make him run. He mentions that one thing he really liked about the comics was that Calvin's fantasies were always drawn more realistically than his reality, because he feels like it says a lot about Calvin's character. As for Hobbes, Watterson says that he felt like Calvin needed something less common than a bear, and as soon as he thought of a tiger he knew it was the best option, especially considering Watterson's fondness for cats.

http://mentalfloss.com/article/53216/mental-floss-exclusive-our-interview-bill-watterson
In this interview of Bill Watterson by Mental Floss (if you don't read Mental Floss, you should), Watterson talks about his lack of autonomy early on when writing Calvin and Hobbes. He reveals that in order to even get published, he had to sign away most of his rights to his own work, and in fighting against licensing deals that would allow Calvin and Hobbes to be merchandised and turned into movies, etc. (think superhero comics here) he risked losing control of his own creation. Apparently, had he not been so passionate in his arguments for the control of the artist over his creations, Watterson's stubbornness could have resulted in someone else being hired to continue writing and drawing Calvin and Hobbes comics - Watterson could ave been replaced regarding his own creation. He reveals a lot of frustration with the comic industry (and rightly so!)