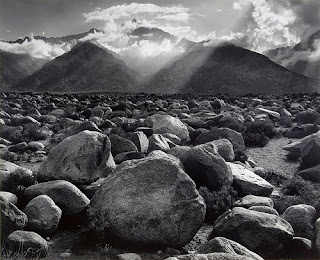 Ansel Adams will go down in history as one of the most incredible and inspirational photographers and environmentalists of all time. Crediting his success to his activity in the Sierra Club, Adams spent his live being infatuated by nature and the environment. He began working in the club in 1919 and was able to capture wildlife in its most raw form. His photographs were first shown in the Club's bulletin in 1922 and that ultimately launched his career. Adam's is most well known for his "straight photography," which means his photos show absolute no sign of dark room manipulation. To this day he is known as the "mast articulate and insistent champion" of straight photography. Contrary to most other professions, Adams didn't work for money. Throughout the beginning of his career he was very poor and his drive came only from passion.
By looking at Adam's work, it's near impossible to not be in awe of the representation of nature and clarity in his work. The details and visibility in each piece make the picture come alive to the viewer. Purposefully lacking in human appearance, each photo gives the feeling of complete solitary peacefulness and purity. Ansel Adam's work will continue to live in infamy and is proof that there is nothing more beautiful and simple than nature.
www.anseladams.com/anseladams_biography_s/51.htm
This website gives a detailed biography of Adams as well as holds the archive to all of his work. You can view each individual piece as well as purchase.
www.sierraclub.org/history/ansel-adams/
Ansel Adams was very active in the Sierra Club and this link gives an explanation of Adam's participation in the club as well as gives information about the club itself.
www.archives.gov/research/ansel-adams/
This is a link to a complete list of Adams photos from all the states he traveled to. This list is organized by state.
Posted by Olivia Sittauer at 4:28 PM
Newer Post Older Post Home