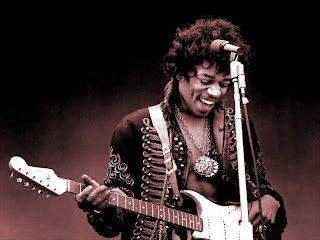 Jimi Hendrix, born in Seattle, isrecognized as arguably one of the most influential musicians of the 20th century. Hendrix is most recognized for pushing the limits of the electric guitar to new and innovative levels, creating sounds and musical forms that had never been heard before. Perhaps most impressive was that Hendrix rose to prominence in the music scene in just four years. He is also remembered for his unique fashion sense, and his habitual use of psychedelic drugs. It was his drug habit that led to his early death at the age of 27. His gravesite and memorial is located in Renton, Washington. On a personal note Jimi Hendrix has had an impact on my as a fan of his personally and also the subsequent bands and musicians that have been influenced by his progression of the musical scene both locally and around the world.

http://www.jimihendrix.com/us/jimi
This link takes you to the main Jimi Hendrix website where you can not only get information about Jimi’s life and music career, but also view different videos and various media about Jimi. Additionally there are events displayed, news involving Hendrix, and various musicand merchandise available for purchase.
http://www.jimihendrixmemorial.com/
This link will take you to the official Jimi Hendrix memorial project website. This website gives people information concerning the Jimi Hendrix memorial located close to Seattle, as well as relevant news and information about the memorial. It also gives history of the memorial and a background about the inspiration of the website.
http://rockhall.com/exhibits/featured-collections/jimi-hendrix/
This website gives people information about Jimi Hendrix and his being inducted in the Rock and Roll Hall of Fame. It also gives users samples of music performed by Jimi Hendrix.
Posted by Unknown at 6:30 PM
Newer Post Older Post Home