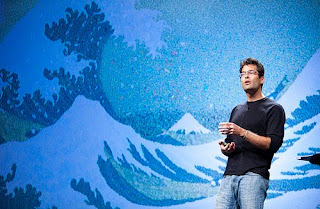 Chris Jordan, also known as the "it" artist of the green movement, is an artist whose large-scale work portrays consumption and waste in our lives. He was born and grew up in Connecticut, then moved to Texas and began spending all of his free time working on photography. Jordan later moved to Seattle, and after ten years of practicing law, he resigned in order to be a full time photographer. His work became an instant hit. Most of his art is made from pictures of mass consumption and garbage. His love for conservation is easily shown in his work and he is trying to spread awareness by using every day items, such as paper cups and soda cans, to reveal the unknowns of consumerism. I think that not only is his work extremely well done, but it is also informative and makes the viewer think about the things they waste daily.
http://seattletimes.nwsource.com/html/pacificnw/2009076640_pacificfootcover19.html - Here is a link to an article about him, his work, and how it is benefitial.
http://www.chrisjordan.com/gallery/rtn/#moon - This link goes to his website of some of his work that shows the numbers of certain items used in our lives.
http://chrisjordan.com/gallery/midway/#CF000700%2016x21 - This portion of his site has photos of decayed birds. It reveals what has been in their stomaches that killed them, and shows the garbage that ends up being consumed by the wild.
Posted by Annie at 2:13 PM
Newer Post Older Post Home