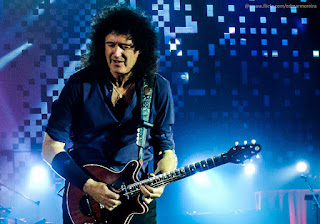 Brian Harold May, born July 19th, 1947, is a British musician most famous for his part of lead guitarist in the band Queen.  His skills on the electric guitar are, in my opinion, some of the best in the rock genre.   Even though Freddie Mercury, the lead singer of Queen received most of the attention for their compositions, May composed just as many songs a Mercury.  He was responsible for Queen's hits "Who Wants to Live Forever", "We Will Rock You" and "Fat Bottomed Girls".  I have always found his talent so fascinating and his ability to construct different and very complex pieces on the guitar.  His skills brought so much to the band, and allowed the band to create their own sound, along with Freddie Mercury's amazing voice.  I have always loved the electric guitar and the music created from it, so Brian may stood out to me as an inspirational and influential person in music.

This website includes a brief biography of Brian May and then discusses how in his later years he has stepped away from music to follow his other passion, science.  He received a doctorate in astrophysics and after his musical career he has returned to the field to study with NASA.  I found this particularly interesting because he is still influential as a person, but has moved his field from music to science.

This Rolling Stones article discussed how Queen is still an influential band nowadays, even though Mercury died in 1991.  May and drummer Roger Taylor are still attempting to create an album, and continue the legacy of the band somewhat.

This site discussed how Brian may is still the "King of Tone" and it also discusses his different strategies for creating new sounds on the electric guitar.  He used nylon strings with some songs to create a different vibe to the songs.  The website also mentions how he is still trying to carry on the legacy of Queen's works.
Posted by CeCe B at 1:13 PM
Newer Post Older Post Home