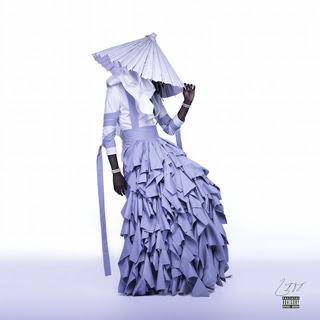 I find Young Thug very fascinating in some ways most people don't view him or have not viewed him before. Young Thug is a very famous rapper from Atlanta known for his obscure melodies in songs, and also having an obscure fashion sense along with it. The reason why I chose to blog about Young Thug is not mainly because of his music (even though I enjoy the way he uses his voice as an instrument to enhance the melody of the beat in his songs) , but because of how he does not seem to care what anyone thinks about the way he dresses and carries himself. There has been a lot on controversy over Young Thug about him calling his male friends "bae" and "sexy"as well as wearing dresses and skirts as shown in his album cover of his latest album "Jeffery". What I admire about Young Thug is that he is not afraid to express his fashion sense no matter how much of a backlash he gets for "dressing like a girl" and "being the first gay gangster rapper". Even in the midst of all the backlash, he continues to dress the way he wishes to dress and talks the way he talks without fearing negative judgment from ANYONE, that alone should be very uplifting for anyone who is scared of being judged, or scared of being ridiculed for the way they dress. Young Thug is a great example of feeling comfortable in your own skin, and not changing who you are as a person just because people don't agree with the way you express yourself. We can all learn from this in a positive way in a sense that we are who we are, and we don't need to apologize for it to anyone. If people are going to judge you, wouldn't you rather it be your true self?

http://www.gq.com/story/young-thug-best-rapper-alive-interview
This is an article of an interview with Young Thug expanding on his rough childhood and a more in depth description of him as a person.

http://www.billboard.com/articles/news/magazine-feature/7503420/young-thug-style-issue-fashion-interview
This is a short article that shows how Young Thug does not care about what others think about what he wears. He wears what he likes and does not feel like gender is involved with his fashion sense.

http://www.dazeddigital.com/fashion/article/32579/1/young-thug-is-the-closest-style-icon-we-have-to-bowie
Here is an article that expands deeply on Young Thug's fashion sense and the way he picks and looks at clothes.
Posted by Unknown at 9:25 PM
Newer Post Older Post Home