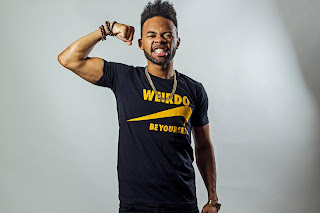 Devvon Terrell is an up and coming artist that not many know.  For an artist, the goal is to create a connection with your fans or listeners.  Devvon Terrell has created a nickname for himself being called "The Living Weirdo." The purpose behind this nickname is to inspire people to be themselves and not worry about what other people think, be you.  This message is what really inspired me and created a connection between a fan and an artist.  His music tends to be a mix of Hip-Hop or R&B which can sound like your normal popular song on the radio.  However, if you listen to the lyrics you can see the positive message that he is trying to send to all his listeners.  He has gained popularity on youtube by doing short two-minute remixes of popular songs his most popular being 679 by Fetty Wap and Work by Rihanna.  What I like about these remixes is he takes a song and makes it his own. He doesn't just change the background beat he also changes the lyrics and makes the song his own and creates a whole new tempo, dynamic, and meaning behind each of his songs.  These and many other remixes have gained popularity on youtube so he has started producing albums which are quickly rising up the charts.  Devvon Terrell is a different artist than most because he doesn't sing about drugs or alcohol instead he sings to spread his vision of being yourself which is what has pulled me towards him.

As a result of Devvon Terrell being an up and coming artist, there are very little articles about him.  This, however, is an interview on why he decided to make music as well as his reason behind being called "The Living Weirdo."

This is an article describing Devvon Terrell's new single Temperature.  In this article, it asks him to describe this song and the meaning in one sentence as well as the reason he chose to make music as well as what happens on his social media accounts.

This is another article explaining what his nickname of "The Living Weirdo" actually means and why he chose it.  He describes his nickname as people just being themselves.  Once that happens you will be happy and enjoying life.
Posted by Colin Stalcup at 2:40 PM
Newer Post Older Post Home