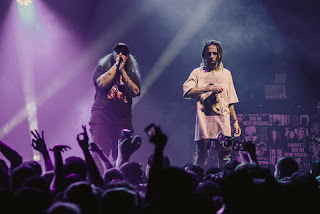 While having quite an intense name $uicideboy$ are a two younger men named Scott Arceneaux Jr and Ruby da Cherry From New Orleans Louisiana. The artists produce hard rap and what some would consider metal. For the last couple of years these artists have really stuck with me because of they're attitude. They do not care what other people think and do what they want when they want without an influence from their fan base. They are not producing mainstream music that sounds like the rest they are producing original works of art. The question has even been raised on "how they changed rap music." I think them having a very unique style is what has made them the stars they are today and that is what will help them to be even more successful in their future. Although not appealing to most I think that these to are very important artists to the music industry. https://www.complex.com/music/2018/09/suicideboys-say-they-influenced-soundcloud-rap-coming-for-their-credit
In this article it talks about how $uicideboy$ feel that they were the main influencers of sound-cloud rap. It is important because sound cloud is what gets a lot of artists started on making music and they think that they were the originators.
https://www.allmusic.com/artist/uicideboy-mn0003530108/biography
This gives background as how the group came together and from then how they have continued to make music and produce albums.
https://www.xxlmag.com/news/2017/04/suicideboys-interview-the-break/
This story gives insight on how the group came to like music and their choice of music before they were creating their own.
Posted by Justin Thurston at 1:09 PM
Newer Post Older Post Home