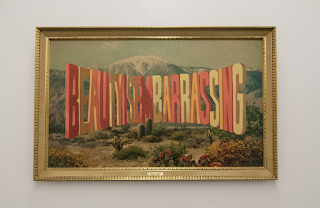 Wayne White is an American visual artist, who has worked on several different projects over the course of his life. One of his most notable projects was his contribution to the TV show Pee-wee's Playhouse. White designed the set and puppets for the show, which ultimately won him three Emmy Awards. He was hired as the art director for music videos for Peter Gabriel and the Smashing Pumpkins, which also won him several awards, including the Billboard award for best art direction in a music video. In recent years, he has been focused on his painting and visual art. While he has worked with 3D mediums, his most well known work is a series of paintings titled "Word Paintings". In this series, White searches for mass-produced lithographs at thrift stores and paints words and phrases over the piece in a bold, 3D style. These paintings are often light hearted and humorous, which effectively changes the tone of the original work from boring to interesting. Wayne White's work is particularly compelling because he strives to turn mass-produced or cookie cutter artwork into an experience for the viewer that is interpretive and interesting to the eye. All of his work is bold and colorful, with a background that juxtaposes the subject of the piece. His work on Pee-wee's Playhouse is rather distinct, and earned him his reputation in the art community as a comedic and tactical genius. A lot of his work is attended to bring joy to the viewer; he works to make people smile. However, he also excels at creating work that successfully sends a message to the viewer, displaying his world views and morality. For example, in his word painting entitled "Beauty is Embarrassing" (pictured above), White aims to playfully tease human nature and the need to appear flawless, by claiming that the act itself should cause shame. He is definitely a talented artist, with original ideas, and is particularly notable, in an age where the norm is to take one's own self too seriously.

https://waynewhiteart.com/
This is Wayne White's personal website, where he displays all of his work, both present and past. Artwork is available for purchase on this website.

http://davidsheltongallery.com/artists/detail/wayne_white
Wayne White's work was featured in David Shelton Gallery for an exhibit. The link above provides a summery of the artist, and images of the work included in the exhibit.

https://www.artsy.net/artist/wayne-white
This is a separate website where Wayne White sells his available artwork and displays his pieces. One could also find other visual artist's work on the site.
Posted by Sabine Kempfe at 3:41 PM
Newer Post Older Post Home