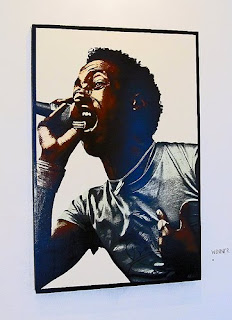 Saul Williams is a very influential New York based poet, rapper, musician, actor and writer, most commonly known for his appearance in the 1998 film Slam, his alternative hip-hop style poetry, and most notably his slam poetry. He was born in Newburgh, New York in 1972, where he attended Newburgh Free Academy. He graduated from Morehouse College with a degree in acting and philosophy. From there he went to New York University in New York City to earn a masters in acting. He started his career as a open mic poet, earning much respect as slam poet, and eventually joining the slam poetry team Nuyorican Poets. The documentary SlamNation follows him and the other members of the team as they compete in the National Poetry Slam held in Portland Oregon in 1996. In 1997-98 Williams serves as the lead actor in the film Slam, which he also helped write. This film won the Sundance Film Festival grand jury prize, and helped put Saul in the national spotlight. At this time he began concentrating on his music. Through his music and poetry he discusses many of the problems created by the government and American society. Much of his work focuses on the loss of identity of African Americans through slavery, and the unjust prison system of the United States. He is also a vocal critic of the war on terrorism in the Middle East. Through his work there is ample evidence that he does not seek fame, fortune, or mainstream media attention, but he aims to educate and spread awareness so that people can use their voices to make change.