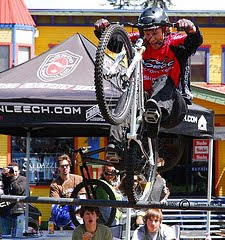 is a trials rider, mountain biking extraordinaire. is a form of mountain biking where the rider incorporates balance and intricate technical skill to balance and perform stunts which are through complicated trials comparable to those included in an obstacle course all performed using the bike as the medium. Ryan began his technical riding during his early teen years. I first got to see Ryan in action at Crankworx in the Summer of 2010 and from his show and narration I was instantly inspired by his dedication and discipline and then after participating in a yoga class in which he led, his level of gratitude was the most inspiring yet. Creative and inspiring Ryan is a gem in an artists pool.

Ryan is, according to his biography, "full of conventional wisdom." Putting his mind to anything Ryan has defined this art independently and impressively on his own. To visit his biography and learn more of his journey as a career trials rider visit his official web page by clicking here.

In addition to being an intrapersonal inspiration, Ryan is also a role model to today's youth. Ryan has begun the Trials of Life project which emphasizes the promise of hard work and following your dreams keeping youth active in their passions before society has the chance to tell them they can't. :) <--Click the smiley to visit Ryan's Trials of Life web site!

Finally to see the master in action; here is one of my favorite mountain biking sites, this link leads to a behind the wheel video of what trials riding and Mr. Leech are all about CLICK HERE TO SEE . . .

FYI: you've probably seen Norco associated with many of Ryan Leech's paraphernalia; he is a sponsor for Norco which is a mountain bike company!
Posted by Ms. House at 11:36 AM
Newer Post Older Post Home