Anyone who is into the electronic music scene knows the name; Armin van Buuren. Armin has been ranked #1 DJ in DJ Magazine's Top 100 fan poll 5 times, 4 of those times consecutive years between 2007 and 2010. Armin produces his own music under his label, Armada Music, and also hosts a weekly radio show A State of Trance which is one of the most listened to radio shows in the world. His uplifting music and energetic stage presence bring audiences of thousands to share in a mutual experience of his performances. His tracks are very transient and emotional, and the feelings he evokes in the hearts of his fans through his music make him a name worth mentioning to those who do not know of him. 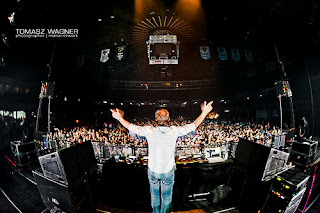 Those seeking more information about Armin and his label Armada can check out the Armada website:
http://www.armadamusic.com/

There was also a documentary released recently about Armin, his ideals, history and daily life, which was released free on Youtube and can be watched here:

http://www.youtube.com/watch?v=VRiHUWWcR98
(This movie is also a good example of what his live stage presence is like, and the immensity of crowds he attracts. It also features many of his own songs, which definitely should be checked out.)

Finally, Armin's radio show, A State of Trance, can be listened to for free at:
http://www.astateoftrance.com/
Armin often plays the most newly released songs in the Trance genre, and other songs that he is currently liking.