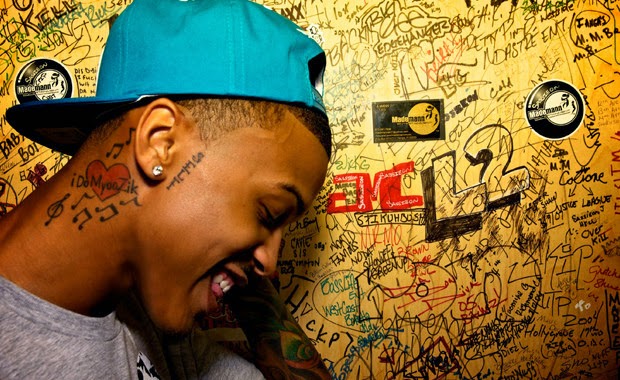 August Anthony Alsina Jr. was born in New Orleans, Louisiana. His date of birth is September 3, 1992 making him at the young age of 21. He is fairly new to to the music industry and 2013-2014 was his breakout years. He was nominated for four awards on BET music awards and won two, Best New Artist and Coca-Cola Viewer's Choice Award.

I grew up listening to all sorts of rap, hip hop, R&B and even some Motown. As time has progressed what I noticed about the evolution of many of these genres is the limitations of the subject matter of their music. It seems as if most rappers and hip hop artists only talk about women, drugs and money. There are the few artists that took a leap and their careers are blooming due to it. August Alsina is one of them. He is of true inspiration, the way he can turn his hardships into beautiful compelling is indication of true talent. He writes his own music, in which you can feel the heart and passion he has for his music. His story of drug addict family members, destruction of his home after hurricane Katrina, and death of his father and brother, he has a lot of bent up emotions that he expresses through his music. Although, he may rap and sing about those experiences he also does not detour completely away from mainstream topics. He carries himself in a mature manner and his songs. His music is well crafted, and songs that you are catchy that you just want to play on repeat. If I am having a bad day, he is one of two artists that I will listen to in order to lighten my mood. Not to mention, he has such an interesting appealing, strong voice that I can listen to for hours and hours. This is also a different flavor then I am used to because his rap and song style is southern and I am a bigger fan of West Coast music. August Alsina Fansite: http://www.augustalsina.com/
This is a link to August Alsina's fansite. This site is a reference to keep current on August Alsina's career, it provides a tour schedule, accomplishments, awards and news about August Alsina. The site also provides other artists on the same label that fans of August Alsina may appreciate as well.

Madame Noire: http://madamenoire.com/420370/august-alsina/
Madame Noire is a cutting-edge web publication that is geared towards African American women. They provide insight on black hair care, relationship advice, fashion trends, entertainment news and parents tips, etc. August Alsina was recently interviewed, and for being a new artist his stardom power is still limited but this interview shows his depth, maturity and how humble this young artist is.

MTV: http://www.mtv.com/artists/august-alsina/
This is a link to MTV's August Alsina artist page. Here you can further explore music, videos, interviews, tweets, photos, tour dates and discography. You can buy tickets to his concerts on this site and download music. There is even a feature in which matches August Alsina to similar artists for fans to checkout.