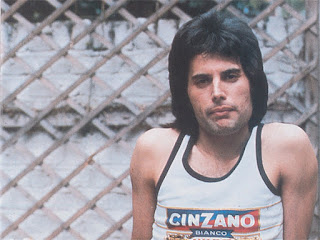 Freddie Mercury has been a part of my life for as long as I can remember. Growing up Queen, The Beatles and a lot of Jimmy Buffet was played in my house, but none of it spoke to me as much as Queen did. Born on September 5th 1946 in Sanzibar Tanzania with the name Farrokh Bulsara, Freddie Mercury grew up in India playing the piano at St. Peter's boarding school where he played in his first band The Hectics. In the 1960's Mercury moved to London and attended the Ealing College of the Art where he befriended many musicians including future band-mates Roger Taylor and Brian May, the drummer and guitarist of Queen. 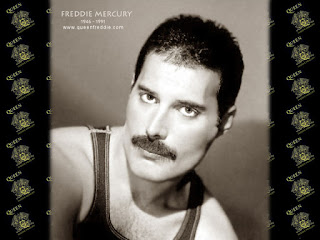 In 1973 Queen released their first self titled album but it was not until 1974 with their Album Sheer Heart Attack which featured their first hit, and one of my personal favorites, "Killer Queen" that Queen became Famous. Queen shows a style and sound unlike any other bands I have heard in large part to the outstanding vocal and songwriting abilities of Freddie Mercury.

Although many of the songs Mercury wrote are about women, offstage he was very open about being bisexual. Mercury lived an expensive lifestyle and was constantly in the public eye. In 1989 however, Mercury began to retreat from public view and on November 23, 1991 he released a statement saying he was HIV positive. Mercury died the next day from pneumonia at the age of 45.

To this day Freddie Mercury and the music he created plays a big role in my life and listening  to his music always puts me in a good mood. His unparalleled vocal range and songwriting ability is what lead Queen to become such a monstrous hit band. Queen is know for its almost Rock Opera style music with fun lyrics which makes listening to them intensely enjoyable. I grew up listening to Queen off cassette tapes and CD players and will hopefully continue to listen to them for the rest of my life.

This page gives a good overview of Freddie Mercury and his career. Included on the web page is a photo gallery of 17 photos of Mercury over the course of his career.


This website has many archived narratives of Freddie Mercuries life and goes into detail about his legacy, greatest achievements and shows his greatest quotes. Also available is a link to the Mercury Phoenix Trust (MCT) which was founded by Mercuries band-mates after his death. In the past 21 years the MCT has donated 16 million dollars to projects and research to help battle AIDS.

A scientific study came out in April of this year showing how unique and unparalleled of a voice Freddie Mercury possessed. They showed that he could product a vibrato with nearly twice ass fast of a vibration frequency as the famous opera singer Luciano Pavarotti.