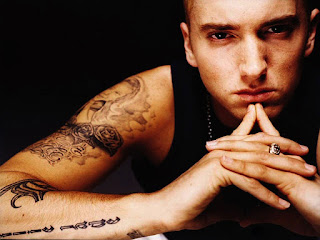 Marshall was born in St. Joseph Missouri on October 17th, 1972.  His mother Debbie was only 15 at the time of his birth.  His father ran away soon after he was born and he makes sure he lets him know in many of his songs today about how bad of a person he was for leaving he and his mom.  His mother wasn't the best to him either, although she took care of him just fine she has admitted to doing hardcore drugs while raising Marshall.  Growing up Marshall had moved from school to school getting bullied almost everywhere he went.  He was bullied so bad he lost consciousness and was hospitalized for four days at the age of nine.  Marshall later decided school wasn't for him after failing three years of school in a row. He later proved that leaving school was a good decision and he would study the dictionary on his own, learning many words to help him rhyme in his songs.  Being white in the rap industry is very tough, and he only got through because certain people recognized his talent.  Marshall changed his name to M&M because the first and last initials of his first and last names are M&M.  Later he changed it to Eminem because it looked better on paper.  Eminem was signed by Dre after being the runner up at the 1997 rap Olympics.  Eminem know has a family and because of that record deal he signed with Dr. Dre he will never have to live like he did growing up.  Eminem proved that it is possible to achieve anything making it out of Detroit and creating a new life for himself that he never would have had without his love for music. Eminem's ability to make such creative songs is the reason he is my favorite artist out there.  I love his story of the struggle he had growing up and how he dealt with everything.  Although he is not the happiest guy his music makes me happy because I understand what he is saying and trying to get a crossed.  My favorite part about his music is it is really fun to sing with his change of tone and voices that make me want to learn all of the words.  It's not so much that I relate to his songs, but that he has a song for whatever mood I'm in and it's really easy to listen to him and get carried away. 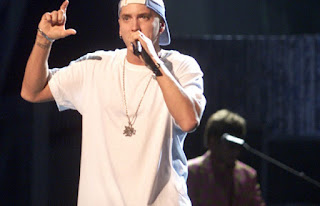 http://www.eminem.com/
You can find the latest sweatshirts, T-shirts and apparel.  You can listen to his music and also see his upcoming tour dates where he will be doing live shows.

http://www.mtv.com/artists/eminem/
This shows music videos of Eminem's songs.  It also shows interviews and backstories of Eminem, sort of like a behind the scenes.

http://eminemworld.com/
Basically everything you need to know about Eminem and the people around him you can find here.  This site has many videos about him and his family along with pictures, a place to interact, lyrics, and information.
Posted by Unknown at 11:33 PM
Newer Post Older Post Home