An artist that has always interested me a great deal is the abstract painter Jackson Pollock. To me he seems like he was one of the most misunderstood artists. He was the first to make such intricate art from doing such a simple concept of painting. The reactions and opinions that came of his work brought a lot of strong feelings to light about whether or not his work should even be considered art or if he was just a drunk alcoholic splattering paint on a canvas. Much like the various opinions that came to light when Pollock was painting at the time, the internet has many various views of his art.

This article really highlights the appreciation of the experimental aspect of his style. I really like this article because it goes into the inspirations, including different people he was inspired by behind different periods in his life and how that shown through in his art of different parts throughout his time painting.

This was a really interesting article to me because it made think of Pollock's work in a way that I hadn't before and that is a technical way. It really taught me what a fractal is, which really gave me a lot greater appreciation of just how much effort he put into what seems like just splatters of paint.

In this article I really liked how the author talked about how Pollock's painting was considered action paining and he basically was dancing and painting at the same time. It seems to me like there are so many instances where different forms of art are basically exclusive from each other but the reason that Pollock is considered one of the best painters by many people is because he was able to incorporate so many different things to come up with his final pieces.

The reason the Jackson Pollock really strikes me as so interesting is because he was someone who can accurately portray a visual depiction of emotions. You can really tell how he was feeling when you look at his work. They are some of the most emotional pieces of art that I have ever seen. A lot of people discredited his work and say that it's just a bunch of paint splattered on a canvas but after looking deeper and really exploring further into his life and career as a painter, I now have a much greater appreciation of him as an artist. This image is an example of his work called 'Free Form" which clearly shows the physical flow aspect that went into the style of Pollock's art. This is an example of when I said that Pollock was an artist how could visually portray emotions and could share with the observer his motives behind is movements and we can have a better understanding of the way he was feeling while creating the given piece. 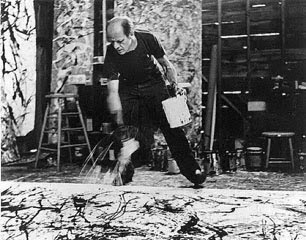 This is an image of Pollock in action. He put his entire mind body and soul into what he was creating and it shows when you look at his work just how much was going on both externally and internally for Pollock when he was in his own world of painting.
Posted by Tea with ZoE at 6:46 PM
Newer Post Older Post Home