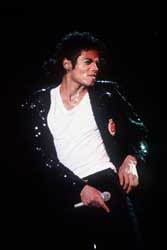 Michael Jackson was born in Gary, Indiana on August 29, 1958. He is known as the “King of Pop” and one of the most significant artists of all time. His music revolutionized the industry and has 13 Grammy awards along with receiving the American Music Award's Artist of the Century Award. He was introduced to music at a young age being in The Jackson 5 music group at the age of 11 with his siblings. He has sold over 750 million albums throughout his career, 13 number 1 singles, and has been inducted into the rock and roll hall of fame twice.

There are not many artists I consider influential to music, but Michael Jacjson is one of the few by revolutionizing the music world with his music to his dancing. The “King of Pop” did it all while entertaining millions of people and doing what he loved to do. You don’t have to love him as a person with his personal struggles, but you can appreciate what he brought to the table and how he has influenced musicians and dancers.

Here are three links that can be useful if you want to know more about Michael Jackson and his career.

This is Michael Jackson’s personal site for fans and here you can listen to the many songs he recorded during his career as a singer, watch videos, or even shop for merchandise.

This site shows videos and music of Michael Jackson. There is a biography on his life and has many sections about him as a person and artist.

This site has many live performances, music videos, and watch the “King of Pop” do what he does best.