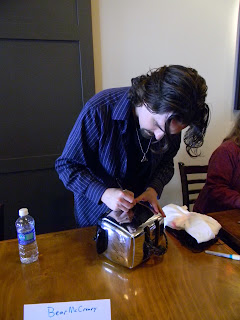 
I took this photograph of Bear McCreary on 4/17/2011 at the Pickford Film Center, after attending the Craft of Composing Workshop as part of NW Projections, Bellingham's film festival.    He is signing a modified Sunbeam Model T-20 toaster that my boyfriend made to look like a Cylon, a fictional AI creature featured in the universe of the Battlestar Galactica (BSG) series. Bear McCreary scored the most recent rendition of BSG (2003 to 2009).  Music plays an interesting and powerful role in this series, almost forming a character of its own that moved the plot forward in unique ways.
You can see Bear grow as a composer as the show developed.  When it started he was the secondary composer, under Richard Gibbs, but early in the series he left the show entirely in the hands of the fresh-faced and bushy-tailed Bear McCreary.  The show producers were apprehensive to let this guy, with such little professional experience, be completely responsible for the show's score, but Bear slowly earned their trust and then started getting more exploitative with the work he created for BSG. It is my personal belief that the score he wrote for this show is largely responsible for the huge success of the show.  I have a hard time imagining it being nearly as moving if it were scored by anyone else.
Since then, Bear has gone on to work on many other TV series and movies. Here is a link to his  IMDd Page, which serves essentially as his resume and lists everything that he has worked on: Bear's IMDd page; As of the writing of this blog entry, there are 54 titles on his page, ranging from the currently very popular TV series The Walking Dead to the video game Dark Void to a short called Geek Like Me to the movie Step Up 3D.
Another important thing, Bear McCreary was raised right here, in Bellingham, WA.  He graduated from Bellingham High School. A good friend of mine cleans the house of his grandparents. He is a local hero, someone from our own backyard who has made a name for himself that is spoken throughout the world.  If you take note on his home page, Bear's home page, under the "concerts" heading, he has performed in Spain, Germany, and throughout the U.S. This page also has some very good clips of his work as well as a blog that he updates frequently with ideas and thoughts about his work. This is a good place to look for inspiration if you are an aspiring film composer.
However, if you're looking for less specific information, just a basic introduction to the man and his work, I recommend spending a minute or two here. On this site you can learn that McCreary’s formal training took place at the prestigious Thornton School of Music at the University of Southern California, where he completed degrees in composition and recording arts. His main professional training came from Elmer Bernstein, who is considered a legend of film music.  Another potentially helpful aspect of this site: several similar artists are named so that you can explore in different directions, if you wish.

Though, if you wish to dig deeper into the world of Bear McCreary, you may want to
check out Bear's facebook page; Here you can get the most up-to-date peak into his world. He'll let you know when he's updated in blog on his webpage, share some random thoughts, share links that relate to him, etc.  Also, this is a good place to send him a question or just a fan letter, if you are so inclined. From my limited personal experience, he's good about reading the letters people send and getting back to them.
Thank you for ready my blog on Bear McCreary.  I am going to see him in two days (on 2-17-12) at the Experienced Music Project in Seattle for the closing day of BSG: the Exhibition.  I hope you check him out.  He really is a very talented and down-to-earth geeky guy that I think you'll like at least as much as I do, if you give him a try.

So say we all,
-Holli