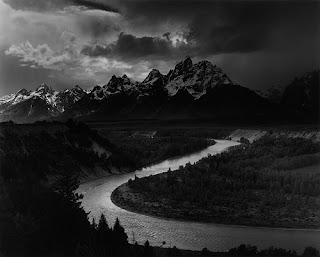 My discovery of Ansel Adams' work came at a very young age during a family trip to Yosemite National Park, and over the years I've been able to piece together why his work stood out to me. I've always enjoyed the outdoors, especially locations far from civilization and the calmness associated with them. I find myself able to just sit hour after hour, just watching nature while I'm unable to sit through an hour long television show without fidgeting and becoming restless. What drew me to Ansel Adams' photographs is that they capture some of those moments in time and make them accessible all over the world. I'm able to glance at his work and be momentarily transported out of my house, or a classroom, or wherever I may be. An overwhelming majority of the rotating backgrounds on my computer follow this theme, and although they were taken by different people, I attribute Ansel Adam's with my discovery of how powerful these images can really be.


The official site of the Ansel Adams Gallery at Yosemite National Park.