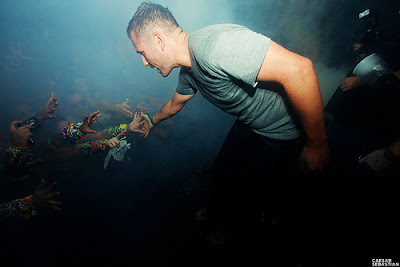 Electronic dance music has expanded immensely these past few years, especially durring 2012. House and club music have started to become the wave of the future for music. We see in on tv shows, in commercials, and now incorporated in main stream music. Kaskade has been around longer than new listeners would expect. His interest of club music started when he was a teen in the 80s. Then further progressed his skills and knowledge when he attended University of Utah in 1992. After many small shows at local clubs and traveling the United States, he first started to make a big name for himself durring 2001 with his first single "What I say" after this moment Kaskade exploded in the club music sene. Ever since that moment he has become a world known DJ.  Kaskade has been an artist that I have followed since the beginning and it's an amazing experience for me to see him progress so much. I have seen him live and my breath was taken away. His sounds, rhythms, and beats have the ability to make you feel that you are on another world.
*Here are some of my favorite songs he has produced :
Kaskade:
- Everything (2001)
- Steppin' out (2001)
- Be Still (2006)
- 4 am (2009)
- Angel On My Shoulder (2009)
- All of the Fire & Ice Album (2011)
Here is a preview to his most recent Tour :Freaks Of Nature (featuring his Fire & Ice album)
http://www.youtube.com/watch?v=PkWN1JECP-U&feature=player_embedded#!

*Links :
1. This first link is a brief biography and how he started his career.
http://thedjlist.com/djs/KASKADE/bio/

2. These two link are an insite to Kaskades success in his shows and his progression of becoming a main stream electronic dance artist
http://www.variety.com/review/VE1117947961

3.  This final link is a good site to check out if you are truly interest in who and what Kaskade is really all about. This gives you an insight on what his shows look like, what his music sounds like, and how he preforms. Also including : Music, Videos, Tour dates, and a Bio
http://www.kaskademusic.com/