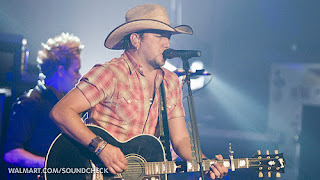 Jason Aldean, his real name being Jason Aldine Williams happens to be my favorite country artist. I have grown up with nothing but country music creating a deep connection within me to my passing childhood. Certain songs evoke memories within me allowing me never to find anything as wonderful and meaningful in the music industry as country music. Jason Aldean’s music career didn’t take off until the year 2005, but the stories within his music are moving and relatable to ones own life. Jason Aldean is a true inspiration and roll model. He acts as though he is a normal guy no too big for his britches with a hunger to sing. All of my friends understand my love and appreciation for Jason Aldean, one of them yelling out “JASON ALDEAN ON TV TURN IT UP!” during this years country music awards. His musical works are modern that reach the tastes of our current generation, yet don’t sway to far away from what the real meaning of country is. His works are worth listening to in any age group.

This link is to Jason Aldean’s first single “Hicktown” which hit the top 10 country songs that served as the lead to his emerging album. Housed on this album as well is, his first number one hit “Why”. This marked the beginning of his successful career, also being nominated for song and video of the year at the AMC’s in 2006.
http://www.youtube.com/watch?v=VZC_wkIW4U4

Here, Jason Aldean talks about his early career struggles in which he almost gave it all up. Learn how his determination and will to keep fighting turned his country music career around.
http://tasteofcountry.com/jason-aldean-career-billboard-nashville/

The following link is Jason Aldean’s Biography from where he grew up, to where he is currently at in his successful career.
http://www.cmt.com/artists/az/aldean_jason/bio.jhtml
Posted by Janelle.Kasch at 9:12 AM
Newer Post Older Post Home