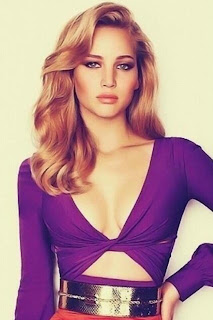 My favorite form of art is film. I probably experience film/movies about twice a week is. My favorite actress at the moment is Jennifer Lawrence who is most famously known for her role in the Hunger Games movies and starring in Silver Linings Playbook for which she won Best Actress. 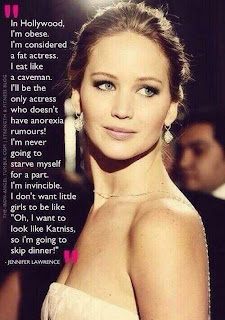 Jennifer grew up in Kentucky and was born in 1990. She is beautiful in more ways than just her looks. She is a role model to me and girls around me because she doesn't take herself seriously. Listen to an interview or watch her at an award show. She’s tripped while accepting an award on national TV and
then joked about it in the post award show interview. She is constantly talking about eating cheese burgers and how lucky and blessed she is to be in a situation where she can influence people.

My favorite quote by Lawrence is posted on the picture to the left. I really relate with it, not because I’ve had an eating disorder but because all of the people in the media and fashion world are the size of my pinky and it’s really disappointing to “normal” looking girls like me. I've grown up athletic and I’ve been a curvy and muscular girl practically since I was born.

http://www.imdb.com/name/nm2225369/bio
The above link is the official bio of Lawrence. It gives her life story and a detailed outline of her life, her resume and all small roles she played while she was an up-and-coming actress.
http://www.people.com/people/jennifer_lawrence/
The above link in from the media/tabloid/gossip magazine “People.” This is an archive of everything that Lawrence has been a part of in the media. You’ll find articles about what/whom she’s wearing, what she’s doing, trips and movies she’s been a part of.
http://jenniferlawrencedaily.com/
This is the ultimate Lawrence fan page. All random facts that any fan or any person who wants to learn about Lawrence will be found at this website as it’s full of videos, interviews, pictures, updates and facts.
Posted by stephaniekirk7 at 11:49 PM
Newer Post Older Post Home