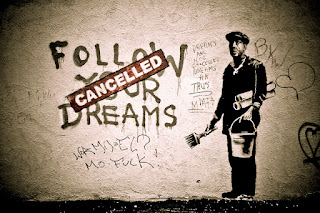 Banksy is a graffiti artist, who generally has very politically compelling pieces of artwork, but nobody knows who he really is. Some even consider him to be one of the most compelling and mysterious artist of our time. Most of his pieces of work are displayed on publicly visible streets and walls of some of the largest cities in the world. In 2010, Bansky made it in the list of the world’s top 100 most influential people, based on his artwork. One of his most recent pieces of work, better out than in, was actually quite disturbing, but got the public to think about a cause important to him. It is a piece of sculpture art where he filled a meat delivery truck stuffed animals that popped there heads out of the truck, as the truck drove around major cities (check posted link for more details). What was the political message he was trying to convey? He was clearly trying to comment on the food industry and the cruelty involved in it for the animals. Although this piece of art is very extreme, he often has more subtle pieces that are still sending a message. For example, his piece included in this blog is a compelling one done in 2010 in Boston shows a lower middle class worker, or painter, who has “canceled” his path to follow his dreams.

http://www.smithsonianmag.com/arts-culture/the-story-behind-banksy-4310304/?no-ist
This is a good website outlining who Bansky is, and how he had become so well-known as a graffiti artist. It also exemplifies much of what he is trying to convey with his work.

http://www.mymodernmet.com/profiles/blogs/banksy-stuffed-animals-truck
This is a link of one of Banksy’s exhibits where he filled a truck with stuffed animals and had it drive through major cities. It includes many photos and a video at the end that is very interesting to watch for peoples’ reactions to his art.

http://www.huffingtonpost.com/entry/mystery-solved-scientists-reveal-banksys-identity_us_56ddb078e4b0000de4053837
Trying to figure out the identity of Bansky has been hard, however some people believe they know who he is. This article shows that London may have tracked down his identity using a technique used to track criminals. There have been many attempts to identify the famous graffiti artist, so is this one believable?