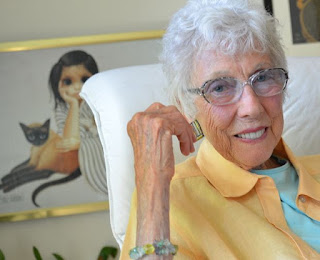 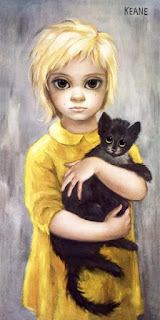 She was originally a Southern Gal born and raised in Tennessee. She started drawing around the age of 10. There she did her first oil painting of two girls, one crying and one laughing. She gave this picture to her grandmother and continued her career from there. When she became an adult she went to two art schools : Watkins Art Institute in Nashville and Traphagen School of Design in New York.  While painting the eyes just eventually got bigger and bigger as time went on.
She eventually got married to her first husband and left him. During the time she was trying to find work and move into her new life she met Walter Keane. They talked, they were both artist and clicked immediately. They got married and she moved in. Walter began to sell her paintings but claim they were his.  The paintings became a huge success. Andy Warhol even enjoyed the paintings himself and stated, "I think what Keane has done is just terrific.It has to be good. If it were bad, so many people wouldn’t like it.”


The paintings continued to sell well under Walter's facade. While Margaret was forced to paint all day long for her horrible abusive husband. She finally left him around 1965 and moved to Honolulu. Once 1970 came around she told the truth about her ex-husband. By 1986 a trial was finally held. The only way to prove her ex's lies was by a paint off. He ran out of the court room in the middle and she won the case.She was supposed to receive $4 million from Walter but that would never been seen due to him spending it all.  Currently she lives in California but often travels back to Honolulu, being one of her favorite places. 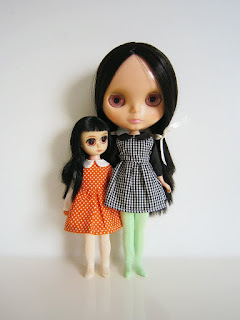 She is still relevant to this day but not in the typical way that other artist are.During the 60's many toy lines began to copy her style. Such as Kiddles, Suzy Sad Eyes and Blythe(See right picture for example). The toys have the same big eyes and feminine features of Keane's art.  These were very popular and the influence still graces our toy isle and our tv screen too. Some modern examples are Littlest pet shop, Disney and Powerpuff Girls.

Check out these websites to find out more about the artist and her work:
http://www.margaretkeane.com/home
http://keane-eyes.com/
http://www.biography.com/people/margaret-keane