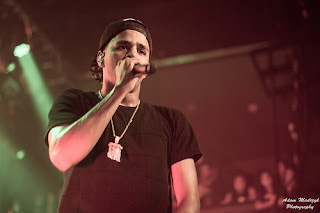 For this assignment I decided to post about is Jermaine Cole or J. Cole. Cole is a very inspirational Hip/hop artist who was born in Germany but was raised in Fayetteville, North Carolina. His mother raised him on her own for the most part. He attended St. Johns university on an academic scholarship where he really started as a rapper. Cole eventually received a call from Jay-z to appear as a feature on his album and later would be the first artist signed to Jay-z's Roc Nation label. I am inspired by Cole because of how he really pushes people to be true to themselves and the meaning and emotion he puts behind each song and album. In many songs he sings from other peoples perspective as well as his own and you can really connect emotionally. What inspires me most about Cole is how, when listening to an album, he really makes you think deeply about the personal and world issues he addresses with amazing lyricism.


http://www.billboard.com/artist/276541/j-cole/biography This link gives you a bit of the biography that I explained above but goes deeper into his career timeline and discography. This is a good link if you want a short review of his career until present.

http://www.npr.org/2011/11/01/141910346/j-cole-an-upstart-rapper-speaks-for-himself This link is a bit more biography on him more on a personal level. It talks about his upbringing with his family and how he and Jay z came together and is included with many quotes from Cole himself.

https://www.discogs.com/artist/750828-J-Cole This last link gives a short bio on Cole and lists the discography from his first tape in 2007 to present. There are many albums and singles and comments at the bottom of the page of people speaking their minds on the music.