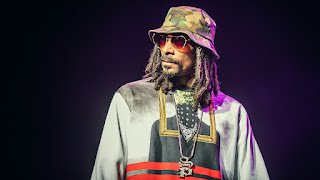 Snoop Dogg is Born Calvin Broadus on October 20, 1971, in Long Beach, California, Snoop Dogg got his nickname from his mother because she thought he looked like the character in the Peanuts cartoon. His first album, Doggystyle (1993), climbed its way to the No. 1 spot on Billboard's hip-hop and Top 200 charts, and his music and trouble with the law have kept him in the headlines ever since. In early 2012, Snoop announced that he was working for the first time on an all-reggae album, Reincarnation. Later in 2012, he announced that, in conjunction with his reggae project, he was dropping "Dogg" from his name and becoming "Snoop Lion." (He later returned to his old moniker.) He has the distinction for having the most Grammy nominations of any music artist— 17 to date — but never having won one.

Fans of the Comedy Central Roasts were pleasantly surprised at Snoop's standout performances at several of the Roasts. In particular, they noted his excellent comedic timing, his ability to improvise, and writing almost all of his own jokes, as well as being able to take a joke and the good-natured (albeit low-brow) ribbing at his expense from others on the dais.

He was born as Calvin Cordozar Broadus Jr. on October 20, 1971, in Long Beach, California, to Vernall Varnado, a Vietnam veteran, singer, and mail carrier, and his wife, Beverly Broadus. But Vernall left the family soon after Calvin’s birth and thus Calvin was named after his stepfather, Calvin Cordozar Broadus Sr.
From an early age, he had a keen interest in singing, rapping and playing piano. In 1989, he graduated from the Long Beach Polytechnic High School.
Shortly after graduating from high school, he was arrested after being found in possession of drugs and was frequently in and out of the prison for the next three years.
During this period, he and his cousins recorded homemade tapes, calling their group ‘213’. One of his early solo freestyles over En Vogue's “Hold On” was heard by the influential producer Dr. Dre, who then invited him to an audition.