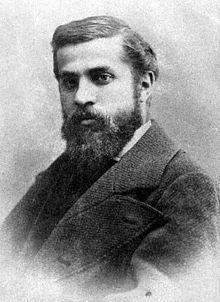 ANTONI GAUDI
Antoni Gaudi is one of the very few exceptional architects who not only understood the engineering aspect of a building, but also incorporated mystical art throughout his work. Gaudi was inspired by Gothic and Islamic architecture, but had a passion for incorporating nature throughout his work. While his designs have an Art Nouveau style, his mystical imaginations created a whole new category on its own.

When architects design a building that goes beyond the goal of providing shelter, can architecture be seen as a form or art? By following engineering and mathematical calculations, architects can create a functional building, then add their artistic flair for esthetics. Traditional artists would argue that the architect should construct the building to be considered a word of art. The answer to this question varies, but I believe Antoni Gaudi is not only a fascinating architect, but is also of the pioneers who successfully showed how a building can truly be a work of art.


This Spanish architect made Barcelona his hometown and ultimately, the city made it his playground. Barcelona is a city that is sprinkled with Gaudi 's architecture throughout the city. As a result, Barcelona gained worldwide fame and a reputation for art. Two of his most famous work are detailed below. 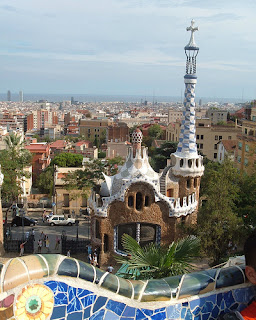 PARC GUELL
One of seven UNESCO World Heritage Sites
http://www.welcome-to-barcelona.com/2012/10/11/park-guell-barcelona/
This website provides a quick overview to some of Gaudi's impressive work in Barcelona.

Parc Guell is an amazing collaboration between sculpture and nature. Sitting up towards a small mountain, the Parc offers a breathtaking panoramic view of the city as it stretches into the Mediterranean Sea. Count Eusebi Guell commissioned Gaudi to originally design a residential complex for the wealthy; however, Guell was not successful in his venture. As time passed, Gaudi transformed this hilltop landscape into one of the most spectacular outdoor venues, showcasing Gaudi’s love of color in the multi-colored mosaic tiles. These tiles are decorated as a mosaic dragon in the entryway or, in the Gran Placa Circular, Gaudi used mosaic tiles to create the world’s largest seated bench where visitors can sit and relax. 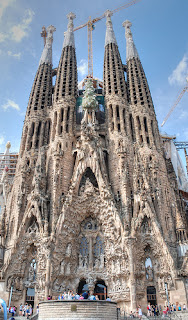 SAGRADA FAMILIA
One of seven UNESCO World Heritage Sites
http://www.sagradafamilia.cat/sf-eng/?lang=0
This website is Sagrada Familia's home page and dedicated to the history and future of the basilica. There is a virtual visit and tickets can also be purchased here.

A trip to Barcelona is not complete without an admiration of this minor basilica. Gaudi started his work in 1883 and is scheduled to complete in 2026, 100 years after his death. It is nearly impossible to describe the basilica in one paragraph and where the saying, ‘a picture can tell a thousand words,’ a photo of La Sagrada Familia is worth at least 100,000 words.


Sagrada Familia has immense geometric details and symbolism throughout the detail. It has been documented that Gaudi learned metalworking, wood carving and glassblowing techniques so that he could instruct artisans who worked under his supervision to execute his vision.

La Sagrada Familia is considered an extraordinary personal interpretation of Gothic architecture since the Middle Ages. Once completed, the basilica will be the largest church in the world.

Rainer Zerbst said, "it is probably impossible to find a church building anything like it in the entire history of art."
-- Rainer Zerbst, Gaudi - a Life Devoted to Architecture, pp. 190-215.
For more information on Antonio Gaudi and his work of art, you can visit http://www.smithsonianmag.com/specialsections/lifelists/Antoni-Gaudis-Barcelona.html.

This is a great website to visit all Seven Wonders of Gaudi's work: http://mikerobbers.hubpages.com/hub/sevenwondersofgaudi