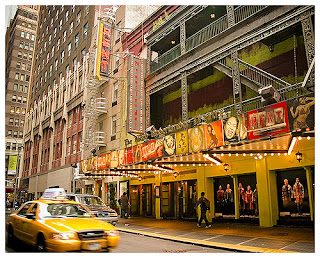 Jonathan Larson may be a name unfamiliar to you. However, he has impacted this world in a large way. His greatest contribution to this world was the musical “Rent.” He was born and raised in the state of New York and lived his early life with the focus being on theatre music. He graduated Adelphi University in Garden City, New York, with the intent of being an actor but he was so influenced by Stephen Sondheim, his mentor, to pursue writing musicals. While he had some success with the rock musical,  “Suburbia”, the musical “Rent” from the get go seemed that it would be a hit.
The musical “Rent” is a story about a group of young poor artists in the East Village of New York while a majority of them have HIV/AIDS. It was inspired by the opera “La Boheme” by Puccini. The parallel’s between the musical and the opera are numerous and make the experience of watching one with the knowledge of the other ten times more enjoyable. The musical is full of heart and powerful songs and themes, such as community, love, acceptance, death and free expression. One of the most powerful songs “Seasons of Love” asks the question “How do you measure a year in the life?” And to this, all it says is “Measure your life in love.” This simple but impactful message has resonated with many lovers of “Rent” and it is hard to imagine that many people would not resonate with this idea. Tragedy hit the night before previews of the musical for the first Off-Broadway production when Larson died of an aneurysm from Marfan Syndrom. His death gave the original production an urgency which then set the standards for the play form the get go.
Due to Larson’s work, the awareness of AIDS in the artist’s community was raised along with AIDS in general. This work had such a huge impact that it won the Pulitzer Award the year after it was debuted. “Rent” was revolutionary for musical because it was young and fresh for the younger crowd with a meaningful story. Larson’s work had taught society so much about the issues of AIDS and about to measure of our life’s important in the love we share.

http://americantheatrewing.org/larsongrants/ -
This website is the run by the same group that runs the Tony Awards. This website talks about how Larson was able to do a good portion of his work because of grants. This inspired people to create grants under his name.

http://www.angelfire.com/in2/everythingisrent/jon.html -
This website gives detailed information regarding everything “Rent” and Jonathan Larson. It talks a lot about the linguistic of curtaining the musical “Rent” and putting it on the stage.

http://www.pbs.org/wnet/broadway/stars/jonathan-larson/  -
This website talks about the history of “Rent” and how it was inspired by the opera “La Boheme.” It also talks about the parallel’s between Larson’s life and his characters.’