Within the last year, the name Billie Eilish has began to surface in the media. At the age of just
16, Eilish is already making herself known as a successful singer/songwriter with popular songs
like Ocean Eyes, Bellyache, and My Boy.

My first exposure to Eilish was on youtube while I was looking for new songs to cover with my ukulele. Her stand-offish personality and quiet raspy voice immediately grabbed my attention; I had to learn more about her. As I spiraled into a tunnel of watching all of her music videos, I realized that my new found obsession with Eilish was due to the fact that she was different, and not afraid to be. She wasn't singing the typical high school love songs and trying to make herself look "appealing" to her audience. She just wanted to be herself - baggy clothes, gold chains, silver hair and all. She has become an inspiration to me musically, but also her position as a role model for the younger generation. She is not afraid to be different and stand out, which is a positive message young people should be receiving in this day and age. 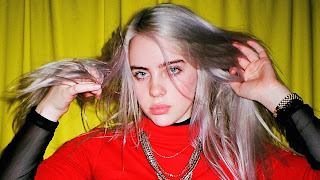 https://www.interviewmagazine.com/music/discovery-billie-eilish As a new artist, Eilish's story is still very fresh in the media. This article is about her journey to fame and her plans for the future. From writing songs about black holes at the age of 5 to composing her first hit with her brother at the age of 13, Eilish has always had a passion for the arts. Although she is a young artist, she is wise beyond her years and is not deterred by what others have to say.

https://www.wmagazine.com/story/billie-eilish-new-ep This article digs into the genre Eilish performs. Her music is dark and fictional, which is something most people wouldn't expect at first glance. Eilish emphasizes her desire to be different which is represented in the way she dresses, performs, and presents herself to the public eye.

https://www.youtube.com/watch?v=gBRi6aZJGj4 This page has the music video, Bellyache that was released in march of 2017. Eilish is seen in a yellow suite, walking in the dessert with a wagon and a bag full of money. One of the very first lines she says is, "My friends aren't far, in the back of my car, lay their bodies." Her fictional/dark genre is clearly represented here along with her creative ability to be different.
Posted by Kanesia Price at 11:04 PM
Newer Post Older Post Home