2. http://www.linmanuel.com/bio
This is general biography of Miranda's life up until this point. It includes his experience as an actor, composer, and singer.

https://www.townandcountrymag.com/leisure/arts-and-culture/amp20091493/lin-manuel-miranda-and-family-interview-june-july-2018/
This article talks about Miranda's contributions to his community and the involvement he and his family have in providing programs for children for the arts.

https://www.broadwayworld.com/people/Lin-Manuel-Miranda/
This website talks about all the awards and recognitions he has received.

3. Lin-Manuel Miranda has changed the way Broadway perceives musical theater. He scored his first Broadway musical in 2008, Into the Heights, and won four Tony awards for that show. He then went on to compose a whole new style of musical, all in hip hop and rap, which had never been attempted before. His musical, Hamilton, took over the world by storm and inspired a new audience to discover and appreciate his hard work on this new form of art. He truly is an amazing composer, but he also starred as the leading role of Alexander Hamilton. He is a gifted rapper and singer and he has made monumental steps for the whole Broadway community. 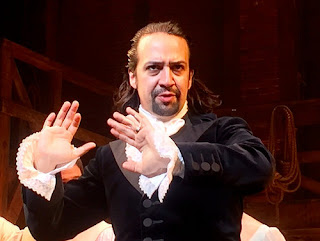