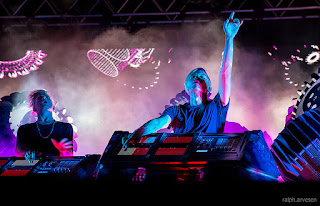 The Glitch Mob is one of the first electronic music artists that I ever had the pleasure of listening to. They kickstarted a love for electronic music within me through their first album ' Drink the Sea'. Edward Ma (edIT), Justin Boreta (Boreta), Josh Mayer (Ooah) are the three members of the band. Each had a sizable discography before forming 'The Glitch Mob'. I really enjoy their studio albums, but their live music is what makes them so inspiring to me. They have designed their own instrument called the 'Blade'. They recently upgraded the instrument to the Blade 2.0. They perform their music on the instrument and it allows them to control the synths and percussion of each song making each performance unique. No song is identical to the studio version and it is a very special, intimate experience at their live shows. 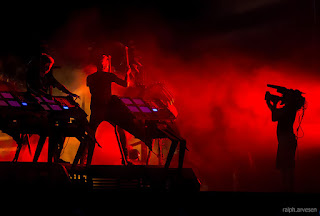 https://en.wikipedia.org/wiki/The_Glitch_Mob
The wikipedia article on The Glitch Mob gives a very good background on the band. It tells their history and how they were formed. A very good introduction to the band.

https://dancingastronaut.com/2018/05/glitch-mob-see-without-eyes-lp-interview-album-review/
Here is a review of their new album, 'See Without Eyes'. It's a well written article explaining several of the songs and collaborations that were made during the album.

http://wxjm.org/interview-the-glitch-mob/
Here is a well done interview with the members of The Glitch Mob. It brings new insight into their relationships and insider information on their albums. This one is a fun read. They are a very modest group of people.
Posted by Unknown at 11:16 AM
Newer Post Older Post Home