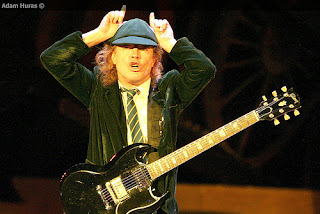 Angus Young is my favorite rock and roll artist. He played guitar in AC/DC which is one of my favorite original rock bands.  The band included Brothers Angus and Malcolm Young on guitar, Bon Scott on vocals, Phil Rudd on drums, and Cliff Williams on bass. The two brothers Angus and Malcolm Young created the band in 1973. AC/DC’s favorite themes was sex and violence witch kept them for being played on many radio stations. In 1980 Bon Scott was still on vocals but in the early 80s Bon died due to heaving drinking. He was replaced by Brian Johnson who performed in the Back in Black album. The band on stage is almost always set up with Phil Rudd on the drums in the back center stage, Malcolm Young playing guitar on the left of the drums, Cliff Williams on bass to the right of the drums, Bon Scott singing moving around stage, and Angus Young using the entire stage. The stage performance of AC/DC is very live. Angus Young, as shown in the picture above is the most known performer from AC/DC wearing his classic black shorts while jumping around stage and doing kicks all while playing his guitar. He would could be defined as the life of the show. AC/DC's music style developed in the British riff-based tradition and is very loud and uses the distortion on the guitar. I find this band worth sharing because Angus and Malcolm Young started this band as two brothers who liked to play the guitar. Since the start they have become very well known and their music is still loved and enjoyed by many people. Another reason is that Malcolm and Angus were able to overcome the death of a friend and band member and continue to create music. This band in my opinion is inspiring to anyone who has a close sibling and the ambition to create something great.

This link takes you to a artist biograph of Angus Young.
Posted by Tyler Miller at 2:37 PM
Newer Post Older Post Home