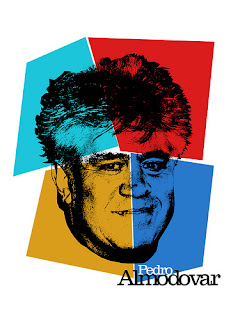 Pedro Almodóvar Caballero is a film director, screenwriter and producer from Calzada de Calatrava (Ciudad Real), Spain. The first movie I ever saw of his is called Mujeres al borde de un ataque de nervios (Women on the verge of a nervous breakdown, 1988), which was a little too dramatic for my likings but I really enjoy watching the films Todo sobre mi madre (All about my mother, 1999)  and my favorite Volver (Return, 2006). Almodóvar uses topics such as police corruption, abuse, drug use, prostition, homosexuality and transgender in the most real way and with some humor. To the left is a photo of Almodóvar and the colors in the pictures are those that are frequently seen in his films. What I find most interesting is he was born and raised during the dictatorship in Spain where topics such as those listed above would have never even been represented in films, or even allowed in general, during the time of Franco. Because of Franco actually, Almodóvar had to self teach himself about film because the school that he wanted to attend was shut down during the dictatorship. Besides the interesting history behind this artist, I chose to write about him because I learned of his works when I lived in Spain and now that I´m here in the U.S., I´m very happy that I can still find other films of his in the U.S. 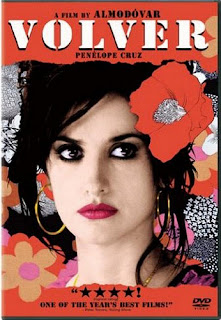 http://www.almodovarlandia.com/almodovarlandia/biography.htm
This link has a biography in english as well as links to other movies of his.

http://www.imdb.com/title/tt0441909/synopsis?ref_=tt_stry_pl
To the right is the cover picture of the movie Volver and above a plot synopsis for the movie.

http://www.interviewmagazine.com/film/pedro-almodovar-im-so-excited/#_
The last link is what Almodóvar is information and a short interview before his recent film came out on 28 June 2013. The interview answers questions such as how he got was able to shoot some of his movies even with all the censorship. 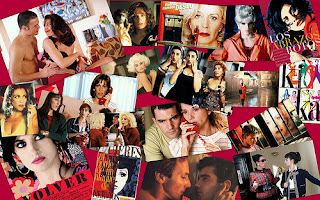 The picture to the left is a collage of clips from his movies as well as the cover art for some of the films. Another movie I almost forgot to mention is called Átame (Tie me up! Tie me down!). The smaller picture in the collage that has a women on the phone with a man (Antonio Banderas) is a shot from that film.
Posted by Unknown at 10:52 PM
Newer Post Older Post Home