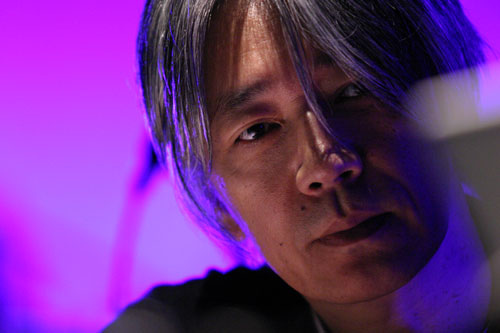 Ryuichi Sakamoto is a Japanese music composer, musician, pianist, and an actor/model. He is multitalented in many different musical styles, including popular, orchestral, classical, new age, alternative, and film music. His success in the film score for Merry Christmas, Mr. Lawrence (1983) for which he received BAFTA Award for Best Film Music, as well as The Last Emperor (1987) which won him an Academy Award, has made him well known. My first encounter with his music was when I first listened to the electronic pop music song, Rydeen, as a child. Sakamoto and two other group members formed, YMO, the electronic pop music trio considered pioneers in their use of technology such as synthesizers, samplers, sequencers, drum machines, computers, and digital recording when these technologies were new to the field of music in late 1970. Sakamoto discovered electronic music during his education at Tokyo National University of Fine Arts and Music, and he later studied composition (classical and contemporary) and ethnomusicology at the same university. Though his success early on in his career has largely been credited to his ability to use music technology, Sakamoto’s piano playing is beautiful and strongly emotion evoking: It is the reason that I chose to write about Sakamoto. I also love his experimental approach to traditional ethnic music such as Chinese, Japanese, Indonesian, and Brazilian, collaborating with a wide variety of musicians around the world.

http://wn.com/ryuichi_sakamoto
This site provides the most comprehensive information about Sakamoto, including his biography, pictures, interviews and free music and video streaming. You can find many Sakamoto’s collaborative works with other musicians/artists as well as orchestral performances.

http://www.furious.com/perfect/ryuichisakamoto.html
This web article is from an online music magazine which I believe that it might be helpful to understand Sakamoto’s music. It describes the significant cultural influence on his style and approach.

http://sitesakamoto.com/
Sakamoto’s official website. It provides his tour schedule and ticket sale information, as well as his social activism project "Chain Music" to promote world peace with other musicians.