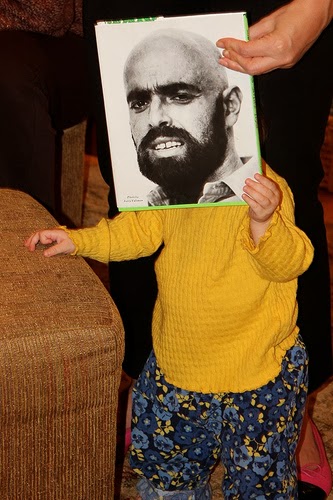 Shel Silverstein, or Uncle Shelly for the little ones, is a poet, playwright and musician who had a knack for fun simple rhymes. He diversely applied this technique to children's poetry (for which he's most famous) and adult-themed situational comedy, in songs and one-act plays. Known for his bald head and imposing beard, he rejected society's notion of visual conformity and embodied an attitude showing a "harsh and real" version of himself, in voice and in appearance.

Silverstein's willingness to buck the "nice" norms of society are extremely inspiring, and continues to give generations permission to play with the way the world seems through his poetry and beyond.

Shel Silverstein was born in 1930, and died in 1999, just three years after publishing his final book, "Falling Up." Twelve of Shel Silverstein's books have been published, including "Where the Sidewalk Ends," "A Light in the Attic," and "The Giving Tree." Less famous are his albums, which included "Boy Named Sue and Other Country Songs" in 1969, the title track of which was later popularized by Johnny Cash. He also wrote more than 100 one-act plays, which have started to be canonized and produced by various theater groups around the country under umbrellas such as "An Adult Evening of Shel Silverstein" or "Shel Shocked."

Some web resources to delight your Shelly bone are found below:

This is an informative site featuring Shel Silverstein's black-and-white hand-drawn style, with information about his life, his works, and some games that were put together out of Shelly creations.

A recorded video of Shel Silverstein on "The Johnny Cash Show" on April 1, 1970. Shel and Johnny perform a verse of "Boy Named Sue" together, and then Shel Silverstein performs a children's song called "Daddy, What If."

Thirteen of Silverstein's poems are available on this website, hosted by a Weber State University professor.
Posted by Jacob at 1:42 PM
Newer Post Older Post Home