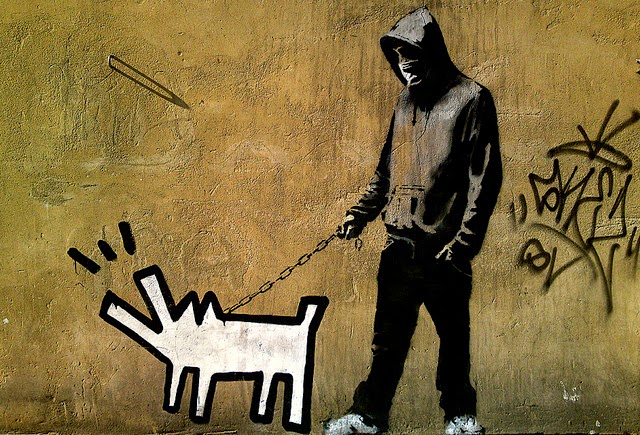 Banksy is the alias of a British street artist, painter, film director, and political activist. His true identity is unknown and has not been identified over the 20 years he's been active. His work, of mostly satirical pieces on politics, pop culture, morality and ethnicities, are a combination of graffiti writing and stencils. His work can be seen on streets, walls, bridges, and billboards of large cities. I believe he is worth recognising ecause he inspires change and challenges ideas. Much of his work influenced me to rethink social norms in a new perspective portrayed by his art. Also, because he chooses to remain unnamed, much of his work go unverified; but the idea and style behind his art is so unique that banksys' signature becomes the painting itself. I think that is something many artist aspire for- an identity.

http://banksy.co.uk
This website is allegedly created by Banksy and it exhibits his work. It divides the work into art he has done on the street and art displayed in galleries. There is also a Q and A section.

http://www.fastcompany.com
This article from fast company describes irony and satire in the Banksy's documentary "Exit through the Gift Shop". A read through will give a deeper understanding of Banksy's purpose behind the film and his street art.

http://weburbanist.com
This website is a great source of interviews, videos, and articles about Banksy. The site gives a thorough biography of him and displays much of his work. You can also view art of his that has been sold or are for sale.