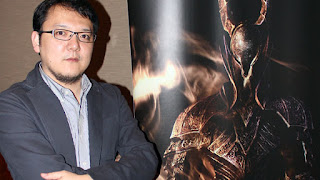 Since I was a child, I have always had a difficult time connecting to art. As an autistic person it is very hard for me to see a painting or drawing and understand the emotional depth and/or meaning behind it. Similarly, I wasn’t even able to listen to music without feeling anxious and overwhelmed until my early teenage years.  However, when I was in third grade, I found that I could connect to art in the form of video games.  Being able to explore entire worlds full of music and art on my own terms allowed me to connect to the world in a way that I never could previously. Therefore, after a lot of research and thought, I have chosen to write this post about my favorite game designer/director, Hidetaka Miyazaki. For those that don’t know, Miyazaki is the creator of Demon Souls (2009), the Dark Souls trilogy (2011-2016), and Bloodborne (2015), as well as various other titles. These games are infamous for their extremely challenging gameplay, but they are also beautifully designed and accompanied by stunning soundtracks.  Even if you’re not interested in video games, I highly recommend looking at the concept art or listening to the soundtracks for these games. Though Hidetaka Miyazaki is not an artist in the traditional sense, I truly believe that he has created art that is just as important and thought-provoking as any painting or symphony. Especially to me. 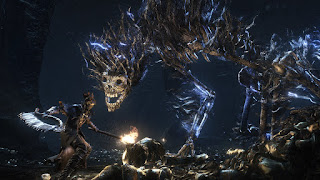 Hidetaka Miyazaki is the representative director and president of From Software, the company which developed and published the Souls games, Bloodborne, and other titles of a similar caliber. This website features a lot of great information about the history of the company and the games they have developed over the years.
https://www.fromsoftware.jp/ww/

A few years back I bought the official Bloodborne art book from Japan, and I still love to sit and look through to this day. Although I can’t provide a look into the book, this video game art library provides a ton of detailed images of the concept art for the game.
https://www.creativeuncut.com/art_bloodborne_a.html

Miyazaki has given a lot of interesting interviews, but I found that this one in particular gives a good overview of his journey into video game design and direction. This interview took place in 2015, and as such also includes commentary on the design process of Bloodborne, which at the time had just been released.
https://www.theguardian.com/technology/2015/mar/31/bloodborne-dark-souls-creator-hidetaka-miyazaki-interview