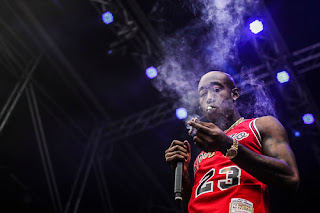 Freddie Gibbs is a hip-hop artist from Gary, Indiana, just south of Chicago metro area. Among the mainstream media, he tends to fall more in the "underground" category of hip-hop and rap. However, I believe he has some of the most complete and well-produced albums of all time and is extremely influential for younger artists in the hip-hop industry. He was born in 1982, so he has been through many different eras of hip-hop music. This, I believe gives him a more broad view of different styles of hip-hop and allows him to constantly change and evolve his sound. For example, probably his most popular album, Piñata (2014), produced by legendary producer Madlib, has very old-school vibes and shows how he was inspired by legendary classic hip-hop artists like 2pac, Pusha-T, and Jay-Z. However, in his 2018 mixtape titled Freddie, he implements many elements of modern "trap" music and shows how he is able to evolve to the current hip-hop style and culture.

This article talks about Freddie's struggles in trying to become a major artist and shows how resilient a person he is. Even now, he has to work hard to keep his image up.

In this interview, Freddie discusses his experiences with racism and police brutality and opens up on his acceptance as a role model within the hip-hop community.

To me, this interview shows a side of Gibbs that we would never normally get to see. He truly opens up about his experiences and talks about the importance of talking about your issues.