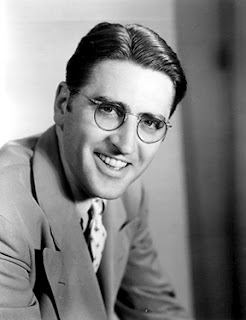 I’ve had a deep love for music and musicals for as long as I can remember.  One of my favorite musicals is The Music Man, the 2003 film version of the same name starring Matthew Broderick and Kristin Chenowith.  Meredith Willson wrote the script and songs for The Music Man which started as a Broadway musical (one of the most successful musicals of all time) before first being turned into a film in 1962.  I really connected to this musical because of the small town setting that's similar to where I grew up and the compelling characters.  The Music Man also features some of my favorite songs like “Till There Was You,” “Goodnight, My Someone,” and “76 Trombones.”  A couple of my favorite Christmas carols, “It’s Beginning to Look a Lot like Christmas” and “Pinecones and Holly Berries,” were also written by Meredith Willson.  Willson’s songs are meaningful, classic, and catchy in my opinion which is why I choose to spotlight him.

The Masterworks Broadway website features short, yet detailed, biographies of notable contributors to the Broadway stage including actors, singers, playwrights, composers, lyricists, producers, directors, etc.  This particular page describes some of Meredith Willson’s personal life with more focus on his contributions to the Broadway stage and music fields in general.

The Songwriter’s Hall of Fame honors Meredith Willson through this page featuring a short biography focusing more on his personal life and his songwriting contributions.  There are interactive elements on this page that make navigating the information lots of fun.

This is the tourism website for Mason City, Iowa where Meredith Willson grew up.  Willson used his hometown as the inspiration for the setting of The Music Man and the 1962 film version was filmed on location in Mason City.  The Visit Mason City website features a biographical timeline of Willson’s life and loads of photos showcasing important locations from the film and Willson’s personal life.