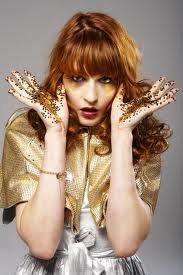 Florence + the Machine is a band made up of five members: Florence Welch, Isabella Summers, Robert Ackroyd, Christopher Lloyd Hayden, Rusty Bradshaw, Tom Monger, and Mark Saunders. Welch is the lead singer with the latter four members supplying all of the background music. The band began when Welch and Summers were teenagers and became what the world knows as Florence + the Machine in 2007. Their songs portray an indie pop sound and since releasing their first album in 2009, they have flourished in popularity. The band was nominated for and won Best New Artist at the 53rd Annual Grammy Awards, among being nominated for 30+ other various awards. Florence + The Machine have a full and overtaking sound. Their music touches people on a level that I feel most bands are unable to. When I listen to their songs, I feel like I am able to lose myself in the bold melodies and powerful lyrics. Songs such as "Shake It Off" allow me to release built up tension that builds up throughout the day or if something is troubling me, I listen to that song and I feel like everything is going to be okay. Every performance I have seen of theirs is energetic and it is apparent that they are in love with performing and have a passion for their music. I feel that everyone should listen to them at least once and even if a person does not feel what I feel when I listen to them, he or she can learn something about what musical talent can be. The strength Welch has in her voice and the emotion she portrays is almost overwhelming at times, but it is enchanting at the same time. It is hard to not love every song they record. I think they are going to be in the public eye for a very long time, and will influence future artists for generations to come.

http://florenceandthemachine.net/ - This is the official website of Florence + the Machine. Here fans can find everything from news, a blog, videos, merchandise, and anything else they could want to know.

http://www.myspace.com/florenceandthemachine - This is the official MySpace page where  fans can listen to free music and watch the music videos, along with similar information on the band's official website.

http://www.facebook.com/florenceandthemachine - On the band's official Facebook, fans can find more recent and continuous updates than on the other two pages. Included are reminders about performances, contests, and other information that might be found of interest.
Posted by abigail_angelica at 9:25 PM
Newer Post Older Post Home