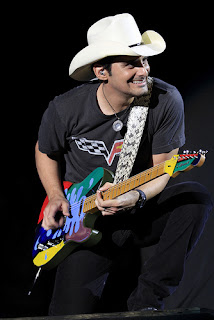 Brad Paisley is a traditional country music singer, songwriter, and musician. Paisley grew up in Glen Dale, West Virginia. He got his love for country music from his grandfather, Warren Jarvis, who gave him his first guitar at 8 years old and taught him how to play. When he was 10 years old, he performed for the first time in public at his church. When he was 12, he wrote his first song, "Born on Christmas Day". From that moment on, he performed everywhere, and everyone in his town was bound to make him a star. He graduated high school in 1991, studied at West Liberty University for 2 years, and then was awarded a full paid scholarship at Belmont University. Within a week of graduating from Belmont, he signed a songwriting contract with EMI Music Publishing. In 1999 he released his first album, entitled "Arista Nashville", and by 2001 it was certified platinum. In 2000 he won a CMA Horizon Award and the Academy of Country Music's best new male vocalist trophy. He also received his first Grammy Award nomination for Best New Artist. From the years 2002-2011, Paisley just kept getting better and better. He was awarded and nominated for many awards and he had 8 consecutive number one country hits. . As a lover of country music, Brad Paisley is one of my favorite artists. I think he is worth sharing because his talents are incredible. He has such pride for what he does and he loves entertaining. When you see him live in concert, you never want to leave. He is one of the best performers I have seen. He has come a long way in his life, starting out young, showing everybody how talented he was and how talented he has become. All in all, Brad Paisley is known as one of the greatest country singers, songwriters, and musician of all time. 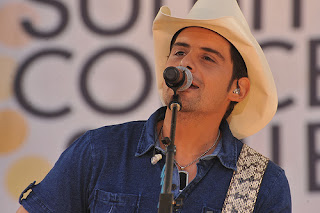 http://bradpaisley.com/tour : This is a website showing all of his tour dates, a biography, photos, and news about him.

http://www.cmt.com/artists/az/paisley_brad/artist.jhtml : This website music videos of his songs, lyrics, photos of him, a biography, awards he has gotten, and more!

http://en.wikipedia.org/wiki/Brad_Paisley : This is website that has a full detailed biography of Paisley, tour dates, and his personal life information.
Posted by Makenna Willhite at 11:50 AM
Newer Post Older Post Home