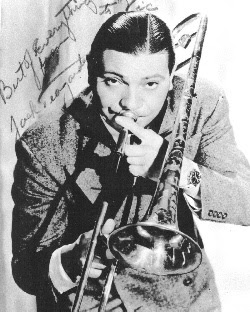 Jazz music has become somewhat of a forgotten art form as of late. When people listen to the popular music on the radio, they remain completely unaware of it's vital musical foundation. A great, but somewhat unknown, trombonist from Vernon, Texas named Jack Teagarden was a part of this movement, playing jazz music throughout the 1920s, 30s, 40s, 50s, and 60s and was often featured beside other famous jazz musicians such as Louis Armstrong. He also happens to be my great-grandfather. By returning to the roots of my family tree, I have been able to not only rediscover some of the more creative origins of my family, but also a taste for this classic genre of music. Through this blog, I hope to open others' eyes and ears to the genius that was Jack Teagarden.

And now for your musical enjoyment...

Some interesting sites to check out...

A site all about Jack as composed by other members of the Teagarden family. This site incorporates everything from videos, music, biography and even a store!

This site focuses mainly on Jack's career as a jazz musician, including suggestions for songs, video clips, and books featuring Teagarden.

You can only learn so much about a man by reading about his life and accomplishments. What better way to appreciate a musician than to listen to his music? This site features free songs as recorded by Jack Teagarden.