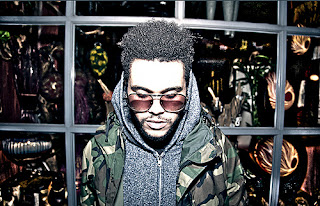 Abel Tesfaye (February 16, 1990), citizen of Canada, and of Ethiopian descent, is an RnB artist taking over the music blog scene. He has three self-produced mixtapes that have been released within the past year. Under his stage name, The Weeknd, he has been uploading his music through YouTube since late 2010. His first album, House of Balloons, was critically acclaimed. First of a trilogy, he later followed his album with Thursday and Echoes of Silence.
Since hitting the scene, he has received a number of praises from musical publications, including MTV, BET, Rolling Stone, XXL, and The Source. They have all dubbed The Weeknd the “Songbird of his Generation” and “best musical talent since Michael Jackson.”  He recently performed at Coachella, a festival renowned for its cutting edge lineup and showcasing many top and up-and-coming acts. In his rise to fame, he has become BFFs with Drake and remixed a song with Lady Gaga, all within a year of first releasing House of Balloons. Number one album of 2011, House of Balloons, beat out Drake’s, Take Care album and Jay-Z and Kanye West’s, Watch the Throne, by Complex Magazine. The Weeknd is set to perform in European festivals in both Spain and Portugal, as well as the Wireless Festival in London.

http://the-weeknd.com/
-Download all three of The Weeknd’s mixtapes at this link here