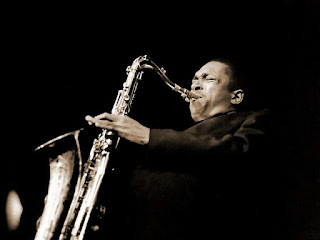 John Coltrane is a personal Jazz hero of mine. Born in 1926 he was introduced to music at a very early age. His father played several instruments which was a major reason why Coltrane decided to learn to play. He first learned the Clarinet and E-flat horn, which is a brass instrument that looks like a very small tuba. In high school he found jazz and that prompted him to start playing the alto sax, which is the saxophone that most people associate with jazz. He was drafted into the Navy during WWII and played with the Navy Band in Hawaii. After the war was over John Coltrane learned how to play the tenor saxophone which he is most known for playing.

After the war John Coltrane went on to play in bands with jazz greats like Dizzy Gillespie and Miles Davis. Both of these men where innovators in the Jazz genre and this sparked John Coltrane's journey to leave a distinct mark on Jazz himself. Miles Davis showed John that Jazz didn't have to be just aimless runs of notes but deliberate and that silence could be just as meaningful as sound. This lesson and John Coltrane's deep spirituality lead him to create soulfully revealing Jazz that people wanted and needed to hear. The deceptive simplicity of John's music has inspired generations of Jazz lovers. No one has done it the same or so spiritually charged since his untimely death in 1967 of liver disease. He is one of the most imitated Jazz musicians that has ever lived.

Official John Coltrane Page
This is the official page of John Coltrane. It contains a biography, a complete discography, store and information about his foundation.