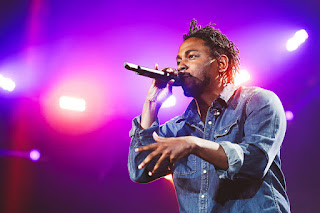 Kendrick Lamar is a hip-hop artist from the city of Compton. He has been involved in music ever since his teenage years, he made his first mixtape back in 2003 under the name K-Dot. The mixtape received attention locally, but it wasn't until 2010 that Kendrick started to receive widespread recognition for his music. His rise to notoriety arguably came about with the release of his first album Section.80, shortly after he released good Kid m.A.A.d city and recently released another album To Pimp a Butterfly.

I chose this artist because his music truly resonates with me in a way that no other artist has. My "relationship" with his music has been constantly evolving, I've never found an artist that has challenged my own perspective as much as Kendrick has been able to. I've been listening to him for a couple of years now and over that time my view of him as an artist, as a person and my view of his music, have changed drastically.

Like most hip-hop artists Kendrick speaks candidly about drug use, violence, and making money but unlike most artists in the genre, Kendrick's tone regarding these topics is entirely different almost disdainful yet understanding and sympathetic. The most interesting part of this, is that this tone is not overtly obvious the first time listening to Kendrick's music. He has several songs that are perfect examples of this; "Swimming Pools" off good Kid m.A.A.d city and "A.D.H.D" off Section.80 both convey this unique tone.

If you were to listen to those songs without truly picking apart the complexity of the lyrics, you could easily miss Kendrick's message. This is exactly how my relationship with his music has evolved, and changed my own perspective on how I've been living. When I first got into his music I enjoyed how it made me feel, the lyrics were rough and uncensored, they made me feel like I could be as tough as someone who grew up in one of the roughest cities in the nation. Over time after listening to him frequently, I began to have revelations listening to his songs, realizing the true message he was trying to convey. When I saw him perform at the Sasquatch Music Festival this past memorial day weekend was when I really started to take some of the things he was saying to heart.

This isn't really the place for many specifics, so I won't elaborate too much, but Kendrick has shared a lot of his insight with me. This insight has come from his music mostly but especially from seeing him perform live. During that performance, he wasn't afraid to be "real" with the audience. The questions he asked during that performance stuck with me and made me question my own behaviors and patterns of substance use. I still have a lot of questions that I believe he prompted, honestly I would love to have the chance to just have a conversation with this person. His life experience has been so drastically different than mine and I believe he has a lot to share based on that experience, things that are so valuable they shouldn't just be overlooked because it is contained in hip-hop music.

Enough of my opinion, I've put some links below with other's thoughts about Kendrick:

As such a powerful and compelling artist, he is inevitably surrounded by some controversy.
The following link details the opinion of a pundit of FOX News. I chose this link because it is the polar opposite of my opinion of this artist, and goes so far to claim that Kendrick's music has, "done more damage to young African-Americans than racism".

The next link I'm providing presents mixed opinions about his most recent release To Pimp A Butterfly. I'm choosing this link because it outlines both perspectives very well, both the pros and cons.


The last link I am presenting covers just how challenging To Pimp A Butterfly is, and discusses some of the subtleties contained in the album that some may miss.