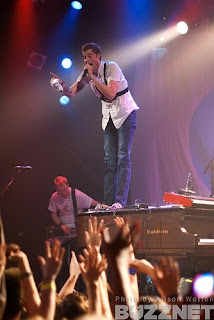 Andrew McMahon is a singer, songwriter and musician in the bands Something Corporate and Jack's Mannequin. He started playing music at the piano when he was nine, shortly after his Uncle died, and he has loved music ever since and now rarely parts from his beloved piano. The punk-rock band Something Corporate helped him get started and noticed when he was still in his teens, but I feel that his involvement predominately in Jack's Mannequin showcases and reflects his more modern and mature side that he lives today.

His passion for music is revealed in his live performances in which he is lively, energetic, and often standing on his piano or slamming his fingers on the keys to get the crowd involved. I personally find his lyrics to be inspiring, poetic and real to the hardships of life.

McMahon was diagnosed with leukemia in 2005 and had to undergo intense changes in which he documents in a video titled Dear Jack. You can watch a clip of the video and/or donate to the Dear Jack Foundation here.

Andrew recovered from the cancer when he received a stem cell transplant from his sister and released his most recent album, The Glass Passenger, in which he confronts some of his issues and feelings with cancer. "Swim" is one of the most powerful songs on the record, which serves to give hope to fans struggling with problems as well as himself.

His blog, tour dates, general news and videos for Jack's Mannequin, which he is primarily involved in, are available here. And more information on his music or personal life is available here.
Posted by Tara K at 12:01 PM
Newer Post Older Post Home