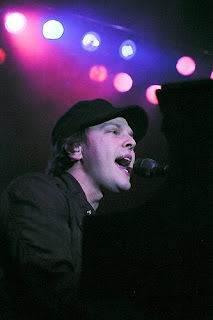 Gavin Degraw is a singer-songwriter and musician. He is a man of many talents. Born on February 4, 1977 and grew up in South Fallsburg, New York. He began singing and playing the piano at the age of eight. He also plays the guitar. The music genre Gavin sings is rock and blue eyed soul music. He got his big break in 2003 when his hit single "I Don't Want to Be" was chosen to be the theme song for the show One Tree Hill. From there on Gavin continued to have hits such as "Chariot" and "Follow Through". Gavin's music has been featured in movies such as Tristan and Isolde and television shows such as What I Like About You. He has had three albums come out and has a new album called Sweeter coming out in September.
Gavin Degraw to me is such a compelling songwriter/singer. He takes everyday experiences and makes songs out of them. He expresses emotions that people feel through the good and bad times. He is a singer that to me reaches my soul and sends good messages. A lot of his focus that he sings about is love. He gives such different perspectives, but also expresses the exact feelings one would feel in particular situations. He is my go to happy day and sad day music. He has a soulful voice and touching songs that make me drawn to him. He may not be extremely well known, but definitely someone I would highly recommend to listen to!
http://preorder.gavindegraw.com/
This is a website where fans can preorder music. They can also read his biography, learn about upcoming news, look at photos, and listen to music. This website is where fans can join the fan base and see where all of his tours are going.
http://www.gavindegraw.com
This is the official Gavin Degraw website. Here you can learn all about Gavin and whats going on in his career. You can also view posts from Gavin and ask him questions.
http://www.answers.com/topic/gavin-degraw
This website tells it all. Questions are answered here about Gavin and his career. It is a tell all of his life based off of questions.
Posted by kwilson at 1:19 PM
Newer Post Older Post Home